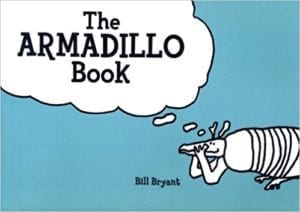 Living in the South and Central United States, you will get to know the armadillo very well. The creature is a bit slow-witted, and has a tendency to believe that he can cross in front of a semi going 90 miles an hour on the highway. In fact, there are many who believe armadillos are the first species who brought suicide and self-destruction into our culture. What they do have, however, is a protective shell (that doesn’t protect very well), but can take out many tires and offer payback in that small way by making you put out money to replace the rubber you’ve just lost on the road.

This author has put together a book that, on each page, offers a black and white drawing with a caption that jokingly refers to the slightly dull animal who is still a staple of the United States. Even after all this time, with the many deaths of the armadillo on the highways, they are still here, which means they truly do have a penchant for life (or, they like to breed a great deal).

Some of the pictures and captions are extremely endearing, like the armadillo staring at a junk yard laughing because he knows that his family’s ‘spikes’ were responsible for taking many of those gas-guzzling machines off the road. Or, clips that show the Southern landscape, pre-highway era, with armadillos amassing in hordes that are larger than the ones picketing Wall Street right now. Unfortunately, some simply ‘miss the mark.’ Certain representations would immediately have people offended. So, for those who have a sense of humor, this book is fine. For others, I have a feeling that in this world of controversy where everyone can find something to fight about in everything - heck, I’m waiting for a chocolate chip cookie debate - they will simply find the pictures crude.

The illustrations, unfortunately, look as if a five-year-old has drawn them. And the book, itself, reminds me of the 101 Uses for a Dead Cat, first published in 1981 by Simon Bond. Some readers thought it was adorable, while other readers thought it was simply sick and twisted and didn’t deserve to be on the bookshelves. Here’s the thing…I don’t think Mr. Bond cared one iota about the throngs who disliked the book, seeing that the collection was eventually republished in 20 countries and sold over 2 million copies; spawning the sequels, 101 More Uses of a Dead Cat and Uses of a Dead Cat in History, as well as calendars featuring the cartoons. Therefore, this author may be on to something.

So, just remember, go into this with a sense of humor. The armadillo’s plight is huge, of course, and this is an animal who does seem to have a tendency for self-mutilation, yet their revenge is sweet and they will most likely outlast us by billions of years.

Quill Says: This is just not a book this reviewer can recommend. The illustrations need more work and it‘s just not…forgive me…funny.