The Entrepreneur: The Way Back for the U.S. Economy 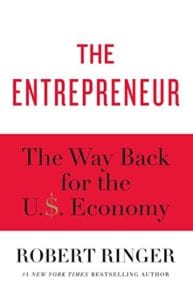 The Entrepreneur: The Way Back for the U.S. Economy

Robert Ringer begins The Entrepreneur by laying the foundation of defining the intrinsic differences between a retrogressive and an entrepreneur. A retrogressive is someone who has a deep-rooted belief that government is their central power and therefore it has the absolute entitlement to interfere with both the economy and an individual’s life. Further, the retrogressive believes it is the government’s moral obligation to do so. In a warped and false sense of security, the retrogressive believes the greater the imposition and involvement in private life by the government, the better off we, the people are. Ringer vehemently argues, however, that nowhere in the Constitution is there an “…enumerated power to that effect…” The entrepreneur, on the other hand, is someone who does not require nor crave the meddling of the government. Rather, he or she is someone unleashed and unabashed to innovate and create products and services, which in turn, creates new jobs. There is a domino effect of exponential growth from new jobs to expanding business to economic growth—at the hands and behest of the entrepreneur if they are left alone by the almighty government to do so. Ringer labels the entrepreneur early on as the ‘unsung hero.’ He emphatically supports the entrepreneur and backs his premise up often throughout his book; beginning with bold statements such as: “…The time has come for Americans to tell politicians they don’t want any more quick fixes. What we need is for government to get out of the way and allow the entrepreneur to move our country forward…”

This is not a work of flowery prose and Ringer masterfully launches his inherent beliefs toward the necessity of entrepreneurs in our free America by using succinct and direct dialect. He implores the reader to sit up and take notice of the cataclysmic brink of disaster we are headed toward if we, the people, do not wake up and wrestle the stronghold government has imposed on each and every one of us. Ringer has done his homework and done it well. He outlines the interferences and impositions put upon our country by government; a practice he explains through his research, that has continued to evolve from a time dating back to Woodrow Wilson’s regime. Barely twenty pages into the book Ringer spells out his book’s message in clear and simple language: “…The central focus of this book is twofold: (1) to explain what it takes for an entrepreneur to succeed and (2) to demonstrate how government meddling in the economy gets in the way of his creating products and services that people want—at the lowest possible prices…”

This is a compelling wake up call of informed (and validated) research from a man who clearly has passion toward the greatness this country can recapture. He is diligent in stressing the inherent responsibility of every American to sit up and take notice of what retrogression is doing to our society. He explains that by quashing the freedoms and liberties of entrepreneurship, the American dream dies along with it. He points out how illogical the constant rhetoric of the rich having to give to the poor and less fortunate is the antithesis of what our founding fathers set out to accomplish in our great nation. He does not pummel the current administration; however, he does not candy-coat his words to drive his point of discourse.

The sheer poignancy and eloquence Mr. Ringer has put down on the pages is something that should be required reading in all of our educational institutions. Compassion resonates through his words on every page. His brash commitment to take his First Amendment Rights and portray the truth as he sees it (and has so eloquently done in this book), makes it a must read for any American interested in believing our country can thrive once more. He insists while the most egregious display of the final march toward socialism is upon us, it is lending way to an eventual communistic society. Essentially, he implores the reader to stand up, take notice and take action. Bravo, Mr. Ringer. This is truly a magnificent book.

Quill Says: There is nothing preachy about this book. Mr. Ringer is passionate toward his views on government meddling and has captured the essence in terms that makes this a thought-provoking and eye-opening read.