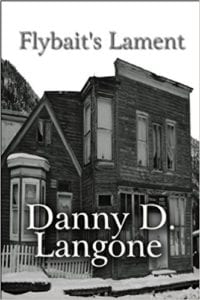 From the first paragraph of Flybait’s Lament, readers are plopped down in an unusual town with a twisted sense of community. “People weren’t known to be that considerate in the little southwestern town of Flybait, Texas. They were always attaching names to people based on some physical deformity or fateful event in that person’s life. When Lucien Wilkes lost a leg in a farming accident people started calling him Gimpy Wilkes. There was Stanley ‘Snot’ Gurgins who was born with a cleft pallet and had a nasal opening so large people swore you could see his brain.” The author playfully paints a plethora of quirky inhabitants in this rough and tumble town using a palette of shades running from funny to profane.

The action opens with a Keystone Kops-type escapade surrounding the discovery of a newborn in the business end of a toilet stall at a movie theater. When the theater manager, Six-Splice, discovers the baby, he makes his emphysemic way to the town bar, where he and a ragtag bunch of regulars try to solve the crisis with non-stop slapstick ignorance. In this fashion, readers are introduced to the core population of Flybait. Langone presents a lengthy series of character portraits of truly deficient souls, a mixed bag of Texan backwater simpletons and stereotypes of half-wit hillbillies who say things like “busier than a two-tailed cat in a mousetrap factory” and “You ain’t got the brains to walk and fart at the same time!” The broad humor of the first half of Flybait’s Lament blends funny and macabre, leaving the reader smiling and grimacing at the same time, not sure whether to laugh or feel sorry for the folks living in this “dried-up-puddle-of-a-town.”

In his attempts to amuse the reader, Langone finds no pun or scatological reference too silly to pass up. We meet Scabby, a kid whose major hobby is “digging in his butt,” a feature the author never seems to tire of pointing out. And then there is Myrtle, a barfly with a lazy eye who becomes repeatedly covered with urine (both hers and other’s) as well as other unsavory liquids as the comedy commences. The baby found in the toilet? He quickly is christened with the nickname “Turd.” Readers who find bathroom humor and locker room sexual references amusing will certainly get a kick out of Flybait’s Lament.

Once Langone gets all the guffaws and hijinx out of the way, he constructs a plot with intrigue and pathos. The author weaves an engaging story with interesting twists and turns in the second half of the book. The characters deepen and grow beyond their superficial oddities, becoming instantly more compelling and appealing. Readers begin to feel sympathetic for the inhabitants of this down-on-its-luck town, where the one traffic light is purchased out of a sense of false optimism rather than actual need, as the author gifts readers with solid writing and a quick descriptive flair.

Quill says: With scatological silliness and macabre mayhem, the grimly goofy inhabitants of this backwater town deal with mystery and intrigue.