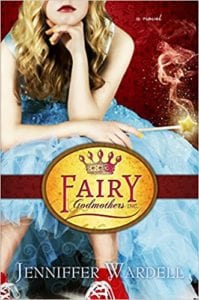 Don’t let the name fool you…this is not a YA where all the little characters are happy and safe and looking for their ‘Happily Ever After.’ Oh, no…this is way better than that! This is an adult fiction title that is literally filled with humor, innuendos and characters you will not forget.

Fairy Godmother, Inc. is a very lucrative business used by one and all. Clients from various kingdoms hire these people to get their happy ending. Kate Harris is one of the fairies that’s hired and she is absolutely, unforgettably sarcastic. She’s a little down on her job and is sick of wearing the fluffy blue tulle skirt, which is the company uniform. She has to deal with clients (Queens, etc.) who want their daughters to have a nobleman who has been enchanted into a dragon, or perhaps a stallion - they want that fantastical scene where their child kisses the frog and gets a truly stunning prince.

Kate’s boss, Bubbles, is a little mean. She wants the company to run well, yet her fairies aren’t using the True Love ‘cologne’ when they’re supposed to, they’re forgetting the clause in the client contract that says they do get swans on the big day…basically, the boss is angry at the employees. So the day she has to give Kate a major contract for a young princess to get that magic day, Bubbles already feels like Kate is going to screw it up.

Kate is assigned Rellie - a good girl, funny, sweet, beautiful, violet eyes, yet dumb as a brick. Rellie works in the ‘cinders’ all day for her evil stepmother (get it?). And when she meets up with Kate and learns she can get that magical day and marry the prince from the kingdom of Somewhere, she basically doesn’t want it. That’s not her wish, you see. She would rather have some fluffy bunny rabbits to play with. But Kate needs to get the job done or risk failure and, most likely, unemployment.

Rupert Charming is the heir of the kingdom who is a bit of a rake. And let’s just say that if Rupert and Rellie do get together and have children, the children’s IQ will be about negative ten. Rupert does have a younger brother named John who actually does all the work and keeps the kingdom running. He discovers Kate and tries to help her with her plan. While helping her, John falls in love with her, and wants nothing more than to just have the ball and get Rupert and Rellie together so he can get a date with Kate.

As the plan goes seriously awry with all kinds of technical difficulties (a demon dog that protects Rellie’s family; no pumpkins to make a carriage out of; a princess who definitely does not want glass slippers because her feet could be cut up; a missing prince; and the fact that there is some dark magic being used that makes people fall in love with someone on sight even though they really love someone else) put this all together and you receive a story that is beyond hysterical.

This is not said very often, but after reading this incredibly fresh tale, fans will hope that Ms. Wardell is making a series out of these Fairy Godmothers. Even the best friend, Lawton, and Kate’s assistant, Ned, are downright hysterical! A+ across the board!

Quill says: A fantastic twist on an old story. Buy this one the second it comes out!