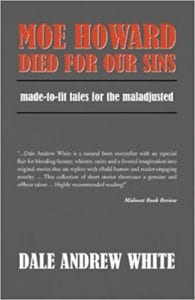 “Mr. Peeve decided to complain to the hotel management about the dead body in his room.” The first line of one of Dale Andrew White’s short stories in Moe Howard Died For Our Sinsis so winningly imaginative it was too hard to resist using as a lure for this review. (Hopefully Mr. White won’t mind.) Indeed there are many choice lines in this story, several of which my companions insisted I share as I chuckled away while reading this book. Moe Howard Died For Our Sins is a collection of humorous short stories that are, at some points, irreverently provocative and at other times just plain guffaw-able, but always a superb display of White’s fine writing style and seriously slanted sense of humor.

In Moe Howard Died For Our Sins, White explores a vast array of topics, all funneled through his tongue-in-cheek, impish humor. He seems to specialize in the literary pairing of unlikely partners in order to illustrate his satires. He links up cults and The Three Stooges in one story, then great literature and organized crime in another. One tale deals with addiction and gravity, while another takes on pornography and a monastery. In “Nature of the Beasts,” which seems to be White’s tribute to Orwell’s “Animal Farm,” the author uses farm animals in a parable about prejudice. In “Babes in Arms,” the chilling social structure of neighborhood children illustrates the battle between dictatorship and democracy. Perplexed by these pairings? You won’t be. White dexterously interweaves the threads in his stories. Though the social commentary is inherent to many essays in this book, it certainly takes a back seat to the humor. White’s handling is so deft and smart that the reader’s interest and amusement cascades from the first line to the satisfying last.

White writes in a melodious film-noire style that you read with your eyes but hear in your ears. The tempo of these short stories make you yearn to hear them aloud, perhaps read by Garrison Keillor or some other adept storyteller. For instance, in a hilariously heartbreaking tale of adolescence, White’s protagonist schemes to win the heart of the fair Crystal Winters in a game of Spin The Bottle. “It would be my opportunity to save Crystal from a more unworthy suitor: Rodney Hunter, the Pepe Le Pew of seventh grade. Rodney’s life glistened like a Pepsodent commercial. He maintained a weekly girlfriend quota that, for others, would have been a lifetime achievement. He wore a necklace of sharks’ teeth, shirts that buttoned at the navel and pants that were tighter than skin on fruit.”

Like ol’ Rodney Hunter, the characters in Moe Howard Died For Our Sins are descriptively detailed as they represent entire classes of people in these allegorical tales. But it’s the names White chooses that brought this reader particular delight: “Mamie Henn, chairwoman of the Netherview High PTA,” the scholastically-challenged teen Skip Dreggs, Pierce LaRue the entertainment critic, and the districts of Dire Straits, Georgia and Mosquito County, Florida, to name but a few. The names bring all sorts of wonderful imagery all by themselves.

Like his choice of names illustrates, White slyly approaches heavy-handedness and over-the-top humor, looks it square in the eye, and gracefully side-steps the temptation. And though White typically keeps a strained check on overt puns, he takes his finger out of the dam in “Life of the Party,” an essay that riffs on the question “Wouldn’t it be funny if the Grim Reaper was thrown a surprise party?” Revelers like Rigor Mortis and Botulism drink Bloody Marys, play games like Give Up the Ghost and Kick the Bucket, and attempt to catch the hard-to-get gal Pneumonia or her more promiscuous cousin Walking Pneumonia “who was intentionally moving slowly enough to be easily apprehended by any potential suitor.” If right at this moment you have a smirk on your face or the echo of your guffaw still rings in the room, you’re sure to enjoy Moe Howard Died For Our Sins.

Quill says: In these witty satires, White mischievously asks “Wouldn’t it be funny if….” leaving readers cackling and considering where his warped imagination will lead us.

For more information on Moe Howard Died For Our Sins: Made-to-fit Tales for the Maladjusted, please visit the author's website at: Dale Andrew White.com