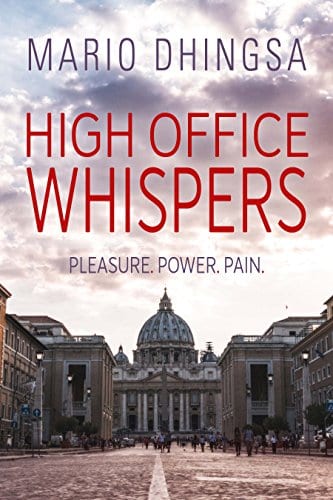 Available only as an ebook, High Office Whispers is a collection of three short stories that were originally written as a radio play.  As such, it reads like a play with notations such as "Choral orchestra heard as scene introduction," or "Door closes. Mobile phone rings," to help set each scene as well as better explain various actions.  For all three stories, the year is 2011, and the place is...well, each place is somewhere very important to world events.  Now on to those stories...

The first story takes place at the Vatican and as in all three stories, revolves around just two people.  For this one, we're taken to a private meeting between Pope Benedict XVI and Silvio Berlusconi, the Prime Minister of Italy.  The real Berlusconi served as Prime Minister for nine years and had a controversial career with many "highlights" including a prison sentence for corruption.  In this story, Berlusconi meets with the Pope at the Pope's request. The Pope, it seems, is bothered by Berlusconi's lifestyle and his apparent ability to spread "...the seeds of sin."  The Pope wants Berlusconi to confess his sins, but will he?

In the second tale, we meet Julia Gillard, the Prime Minister of Australia and Tony Abbott, the Leader of the Opposition (he became Prime Minister in 2013).  On opposing sides, Gillard is hopeful that the two can find middle ground from which to agree.  But Abbott is far more interested in having Gillard call him "Tony A."  Apparently, it's very important to Abbott...When Abbott starts talking about what he does to "...perform in this damn theatre of politics," things really get going.  It sounds a lot like what is happening currently in the U.S.

The final story takes place at the Kremlin between - who else - Vladimir Putin and Dmitry Medvedev (President of Russia).  Putin has called the meeting between the two, at 6 a.m., as a "catch-up" meeting to learn of recent events that he, as Prime Minister, needs to address.  Medvedev does his best to update Putin, but Putin is far more interested in manly things like taking his shirt off.  This meeting is not going to end well...

High Office Whispers is a quick read, one that you could easily do over a leisurely lunch.  The stories are quirky - definitely a bit offbeat and unusual.  They also all made me laugh, roll my eyes numerous times (in a good, "oh my" sort of way), and picture those famous people in the circumstances the author created.  It is definitely interesting to imagine what the Pope or Putin might do behind closed doors and author Mario Dhingsa has given us a humorous look that may also get you thinking about what might really go on when the cameras are gone.  As a very reasonably priced ebook, High Office Whispers is a good investment for a fun afternoon read.

Quill says: If you've ever wondered what happens with powerful people behind closed doors, check out High Office Whispers - you're sure to get a laugh.