TRACKS: A Curious Tale of Who’s Her Daddy? 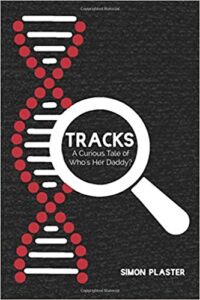 TRACKS: A Curious Tale of Who's Her Daddy?

I don’t know about you, but I miss Henrietta from small-town Henryetta, Oklahoma, when I haven’t seen her in a while. I have a fondness for not only this journalist whose ambition was once to win a Pulitzer Prize, but also for the town, itself. I was lucky enough to stay the night in Henryetta way back when and it’s the only place in the world where you can get a Big Mac and see Dallas Cowboys memorabilia at the same time. Why? Because the McDonald’s there is also the “museum” for Dallas Cowboys QB Troy Aikman. Yes…it’s that cute of a place.

Henrietta’s name on her birth certificate IS spelled with the ‘y’ instead of the ‘i’, in honor of this little village or a typo, no one knows. But she has changed it over time. Well, she was basically just sick of correcting people when they tried to spell it, so she dumped it. After five years of working for the newspaper in that small town, Henrietta took off to Oklahoma City to work there. Turns out, she didn’t like the detestable avenues a journalist had to take at times to land a story, so with the help of an education counselor, she learned that she was best suited for being either a bartender or cook. After those ideas fell apart (while catering, she was actually “demoted from peeling raw shrimp to boiling water”), she was basically looking at heading back home. That is, until a few weeks ago when she met up with a new boyfriend, Joe McDokes. (Unfortunately, like the rest of the men this poor girl has chosen, McDokes is definitely more of a McJoke.)

Receiving a call from her mother, Wynona Sue, Henrietta learns something unexpected. For review purposes, I will just say her mom found a Montgomery Ward divan with ‘stuff’ on it and discovered Henrietta has a different father than the Cajun guy who dumped Mom long ago. Not only that, but the real ‘Baby Daddy’ is a man high-up in the political arena. Apparently, this prominent man had a fling with Wynona Sue when she was just sixteen. Because of this info, and McJoke’s need to talk about family and kids, Henrietta does drive back home.

Wynona Sue has hired the only P.I. in Henryetta – Maximo Morgan – to help her with her case. Now, Max is a hoot. He/she (read to find out) listens to old cases of famous P.I.’s while also doing daily work for the USPS. Buying a fedora, Max learns from people like Mickey Spillane’s Mike Hammer in order to get better at solving crimes. His previous run-ins with Wynona Sue (he accused her of murder once, and then accused her of kidnapping girls for their hair—both of which were never found to be true), caused him to think of her as the “strawberry blonde femme fatale.” Needing his help now, Max soon dives into the case to bring the truth to light.

More is happening in Henryetta, however. A dried-up politician named Buford Bailey, now ex-Mayor, was ousted from the office that the males in his family have held forever. Now his only excitement comes from waiting for the American Pickers (a TV show on The History Channel) to come to his house and pay him lots of money for his collection of antiques (AKA: junk).

On her way back into town after three years is the woman who ousted Bailey: Hildegard Bottomly. Taken from the town the day before winning the election, she’s now coming home to take over and share her never-before-read victory speech. However, her best friend states that citizens may not take to that idea very well and she may get impeached instead. So not only may Hildegard have to hold a lively primary to get the citizens back on her side, but she’ll also have to deal with the ex-Mayor and her archrival, Jonathan Henry, who threw his name into the mayoral race last time and is also the richest man in town.

Let everything from the paternity to the political games begin! I give all kinds of credit to this author, as always. There’s a very thin line between fantastic sarcasm and over-the-top rude. The line becomes evident when characters take things too seriously and their dialogue ends up on the mean side. This cast has the ability to laugh at themselves at all times; thus, allowing the reader to love the memorable interaction, laugh throughout the tale, and have a great time seeing where it all leads.

Quill says: Crowned the “King of Satire” long ago; this is yet another incredible book by the author who shows exactly why he will keep the title.

For more information on TRACKS: A Curious Tale of Who's Her Daddy?, please visit the author's Goodreads page at: Goodreads.SimonPlaster.com