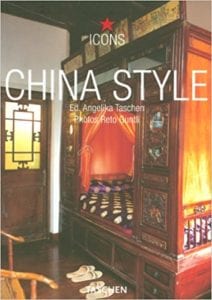 The unmistakable traditional Chinese style “seemed set in stone, as unchanging as those of the Great Wall,” yet subtly incorporated touches of Western style in the first half of the twentieth century. Shanghai began to incorporate touches of Art Deco in its architecture and furnishings while imposing Russian architectural influences swept into cities like Beijing under the influence of Mao Zedong during the cultural revolution. Early photographs, stark, imposing, and somewhat bleak, introduce us to a China that Mao attempted to eradicate. Yet somehow the tradition remained as did its treasures. One of the photographs gives us a glimpse of Tiananmen gate around the time of the cultural revolution. It is alternately called the “Gate of Heavenly Peace,” for its Chinese symbols simply mean heaven, gate, and peace.

In this book you will figuratively enter these gates to see for yourself the beauties of a civilization once hidden from the Western world. It was forbidden for anyone to cross its borders and only brief glances could be made from vantage points outside places like Hong Kong. This book gives the reader a visual tour, silently expressing the evolution of Chinese design that has come down through the ages. The student of Chinese architecture knows that The Tiananmen gate was built during the Ming Dynasty in 1420, but the uninitiated can easily see and appreciate the wonders of its ancient design. Even the rigorous, rugged deck of a boat floating through the waters of a canal city shouts a certain unmistakable Chinese style.

The rugged mountain fortress, the Great Wall of China, is simply breathtaking as it weaves its way through precipitous mountain passes. A simple photograph speaks volumes of a wall once designed to protect its peoples. The towering pagodas speak of a civilization’s connection to their gods, yet the camera swings into the streets to view the simplicity of life. Two men lean over to enjoy their meager lunch while another man quickly peddles past their table, curiously peering into the lens of the camera. The modern day Hong Kong skyline bursts with color, inviting people to cross over into China. Interior views, many from China’s luxurious hotels, shout out the unique influence of China’s style to those browsing the pages of this book.

This swirling tour of the influence of centuries of Chinese influence on everything from small jade figurines to the massive imposing Great Wall of China will astound the reader. The first part of the book briefly tours the ‘exterior’ of the country while the middle portion predominantly captures images from inside the atypical, plush accommodations China has to offer the outside world. For example we view several interiors from the Hong Kong China Club and the Shanghai Hyatt. There is a brief introduction in the front of the book and four pages of thumbnail photographs with simple descriptions of influence and/or location of the photograph.

One photograph’s caption simply states, “Blue moon: a round portal leads to the kitchen.” I loved the brief tour, but felt the book was not truly representative of the real “China style” that people who are anticipating going to China will find. I would have appreciated captions to the pictures and frankly was quite surprised to see photographs of Hong Kong in the middle of this book as most people consider it to be a separate entity from China even though the British Empire returned it to China in 1997. The photography was beautiful, but if the reader is looking for a true, serious representation of the Chinese influence in everything from jade figurines to architecture, they will be sorely disappointed. If they are looking for a casual tour via art photography, they will be delighted.

Quill says: If you are looking for a beautiful, casual tour of snippets of visual China lore as an armchair traveler you will be delighted with the art photography you will find in this charming portrait of China.