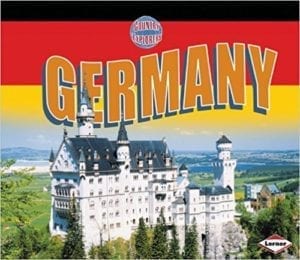 Germany is surrounded by several other European countries. If you take a look at the map in this book you will see that it is bordered by the Netherlands, Belgium, Luxembourg, Switzerland, Austria, the Czech Republic, Denmark and Poland. The North Sea and the Baltic Sea provide parts of its northernmost border. The North German Plain is “open and flat,” the central part of the country is hilly, and the southern part of Germany contains the Barvarian Alps and is blanketed by the Black Forest. Many of us have heard about the Black Forest in Grimm’s Fairy Tales. Remember Hansel and Gretel and that evil witch deep in the forest? The climate is mild and the weather is “warm in winter and cool in the summer.” Historically people have occupied the country for “more than two thousand years.” You’ll get a brief glimpse of its history from 1871 when Otto von Bismarck brought Germany’s states together, through Hitler’s reign, the division of the country, and its reunification in 1990.

Berlin is Germany’s capital. Most people are city dwellers, but some work in the cities and live in the country. If you look closely at one of the photographs in this book you will see a very old building nestled in between several skyscrapers. Of course for those who chose to live outside the cities, they find the “German countryside is quiet and peaceful.” People highly value their families in Germany and in the country “many generations might live together under one roof. The “official language of Germany” is Hochdeutsch (High German), but Plattdeutsch (Low German) is spoken in the north. Children begin school at the age of six and usually arrive in their classrooms by seven thirty in the morning. You’ll learn about elementary school or Grundschule and the different types of schools children might attend as they get older. You’ll also learn about their religion, foods, celebrations, Germany’s castles, sports, the Autobahn, fairy tales, music, jobs, and many other interesting facts about this amazing country.

The book is well researched and written and could easily provide a stepping stone to further research for a school report. The text is generously supplemented by photographs, art reproductions, and has numerous informative sidebars. One sidebar of high interest would be the history of the Gummi Bear candies. I was fascinated by the story of Mad King Ludwig and his obsession with building castles. In the back of the book is a section of “Fast Facts,” information about the German flag, an index, a glossary, and additional recommended book and website resources to explore.

Quill says: This is a fascinating, concise overview of Germany for the young student.