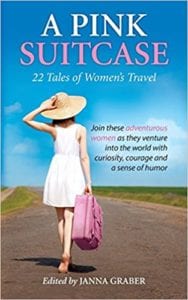 Twenty-two courageous women, who set out to visit some amazing places, and along the way learned more about themselves then they ever dreamed possible. Sound interesting? It is!

Edited by Janna Graber, who herself contributed one of the short stories, A Pink Suitcasechronicles the adventures of some very interesting women. The book takes the reader all over the world, from French Polynesia, to China, Thailand, and, surprisingly (but with a not-to-be-missed story) to the United States. I enjoyed each and every one of these tales and felt as if I was along for the ride.

The book opens with the story of a ‘semimarathon’ in French Polynesia. Author Bernadette Murphy had traveled to the exotic sounding locale to stay with her brother and his Tahitian wife/family. Murphy was technically on sabbatical from the university in California where she taught, but perhaps the real reason she had traveled so far was to recover from the break-up of her 25-year marriage. Feeling alone with a brother she was never very close to, a small island with customs (and bugs!) that she’s never encountered, and a level of humidity that makes running a marathon, even a ‘short’ one of just over 13 miles seem crazy, leaves Murphy feeling lost. How she finds herself, through the wonderful people she is living amongst, as well as her relationship with her brother, is as fascinating as the landscape surrounding her. Both bring the reader into a world they have likely never encountered.

The editor of this work, Janna Graber, adds her own adventure in “Thailand’s Lost Children.” Graber travels to Thailand to research child prostitution for a U.S. newspaper. Wanting to also spend some ‘alone time’ with one of her children, ten-year-old Kristin, and being assured it is safe to travel with a young child by a friend who lives in Thailand, Graber’s trip will open her eyes to not just what happens to the children of Thailand but also to her relationship with Kristin. The reader’s heart will be torn reading about the ‘Lost Children’ as well as rejoicing at the universal themes of loving and caring as Kristin quickly bonds with some local girls who have been saved from prostitution by Graber’s friend.

Another delightful read was Gina Kremer’s recounting of her trip to the exotic setting of...the United States. True, it doesn’t sound that captivating, but Kremer’s planned trip to hike the 2,180 miles of the Appalachian Trail was both funny and eye-opening. As the blisters on her feet grew, so too did her burgeoning understanding of who she is and where she is going. Feeling depressed by a slew of bad events, she was living in her mother’s basement binging on Ben & Jerry’s. By the end of her story, where she completed a 100 mile stretch of the Appalachian Trail, those disheartening events were a dim memory. She had learned so much out in the woods and happily shares with her readers.

A Pink Suitcase worked on many levels, all coming together to create a very satisfying read. The descriptive passages of various landscapes, cultures and customs drew me in to each story. I was easily transported to every locale, enjoying and learning about each. I marveled at the courage of so many of the authors who traveled, many alone, to exotic places that most would hesitate to visit without a companion. Add in the numerous instances of learning so much more about yourself, as well as others, and you have a winner.

Quill says: An utterly, totally, completely enjoyable travelogue. I loved every page of this book.