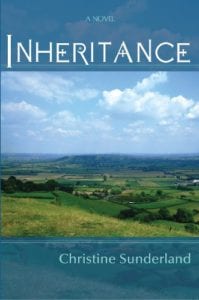 Fans of inspirational fiction may delight in the arrival of Inheritance, the third novel in Christine Sunderland’s trilogy. In the first book, Pilgrimage, we journeyed with historian Madeleine Seymour and her husband Jack through Italy. Next in Offerings, we traveled a winding road to recovery through France. Our European tour concludes with Inheritance as we survey London, England and its surrounding towns. In this book the author does a thorough and tidy job of reminding readers of past story lines and filling in details for readers new to the series. However, I recommend new readers start at the first book; not because you have to, but because if you enjoy Christian historical fiction you will want to.

With this third book, Sunderland seems confident in her literary choices, and her writing style remains poetic, descriptive and developed. In addition, the historical and religious “lessons” continue to be prominent and are given plenty of room to breathe. Using brochures, guidebooks and the history professor’s book manuscript, Sunderland doesn’t miss an opportunity to import interesting details about the political and religious history of England. These instructional moments in the book are almost nearly seamlessly blended into the plot, adding further dimension to the reading experience.

While Pilgrimage focused mainly on Madeleine, and Offerings followed the Seymours and the doctor who would save Jack’s life, Inheritance intertwines three very different story lines that blend together in a complementary braid of imagery and theme. Of course we are guided on our final voyage by Madeleine and Jack as they traverse parts of England seeking out a proper place for the children’s home that Jack vowed to God to establish during his battle with a life-threatening illness. Madeleine reflects as the story sets off, “God had healed him, in so many ways, since his time in France. What was God’s will for them in England?”

The second thread centers on Victoria Nguyen, a seventeen-year-old girl who is exiled to England as she and her father conspire to allow her to carry out her pregnancy in opposition to the wishes of Victoria’s high-powered, politician mother. Victoria obediently follows her father’s guidance as he tells her, “We’ll take one step at a time, okay? We’ll get you to London, get that baby born, and then decide what to do...You made the right choice. This child should not be punished for the sins of the father.”

The third section of Sunderland’s triptych follows the Italian monk, Brother Cristoforo, whom readers met in the second book. We learn more of his personal history and the spiritual quest that motivates him to preach en plein air throughout England. Through Cristoforo, the author dispenses sermons aimed at real, working folk. In fact oftentimes when he is preaching, a crass voice from the crowd challenges him, to which he replies with God’s word. In one of these sermons, he extols, “God gave us free will. We can choose him or not choose him. Adam and Eve chose not. This is why our world suffers…Because many do not choose God, but reject God. To reject God is to welcome sin. With sin comes suffering…and death.”

Trusting God is a common theme blended throughout these three stories. Each of the three central characters must learn to release control of the small and large concerns of life, giving them up to God. Sunderland imparts this concept in many ways, most notably through the eyes of those who just are beginning their journey toward God. Readers witness Jack’s blossoming attachment to the church. As he describes it, “I’m engrafting. I’m engrafting the Word of God onto my soul.” The young Victoria is taking the first steps on this path as she invites Jesus into her heart, a journey that Jack seems thrilled to help her with. He enthuses, “I’ll try not to push her...But when I’m around unbelievers, I feel I’m in a mansion and I want to invite them in to enjoy the feast.”

Much of the dramatic action in Inheritance centers on the hot button topic of abortion as Victoria and her foes fight against her mother’s wishes to retain Victoria’s pregnancy, conceived by anonymous rape. As one would expect, Sunderland presents the issue from a pro-life perspective. However, her argument loses some of its punch by portraying the main opposing characters with broad, simplistic strokes. Victoria’s mother, a highly successful working parent, is presented as an emotionless, agnostic, feminist devoid of maternal instinct. As Victoria’s father describes it to her, “Your mother, my dear, loved you very much, as much as she is capable of loving...In her own way, she loves you still. She just loves herself more. And to be fair, she sees herself as the protector of women in this liberated age.” Meanwhile, Victoria’s father is represented through a more gentle light as a Christian, gentle and nurturing working class man whose major weakness is kowtowing to his wife’s wishes. Finally, the teenaged Victoria is shown as a preternaturally mature girl, who dutifully accepts her father’s every decision. As Victoria contemplates, “Her future loomed large, but a seed was planted in Victoria’s soul, a seed of determination, and this time she would nurture it. She would not kill another child. This baby would live.”

Devoted readers of Sunderland’s first two books definitely will not be disappointed with Inheritance. Once again, the author delivers an appealing balance of drama, history, travelogue and Christianity in a story that will keep readers eagerly turning the pages.

Quill says: The third of Sunderland’s trilogy will not disappoint readers of inspirational fiction.

To learn more about Inheritance, please visit the authors's website at ChristineSunderland.com