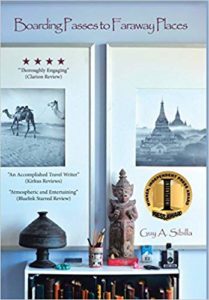 Boarding Passes to Faraway Places is a collection of essays by Guy Sibilla written between 2000 and 2007. They chronicle his travels around the world to countries such as India, East Timor, and Togo, among others. Sibilla describes his work as “adventure travel journalism,” a fitting title for the exciting and unpredictable journeys he takes his readers on. These vivid first-person accounts capture Sibilla’s audience and transports them to the fascinating, faraway places he explores.

Sibilla sums up Boarding Passes to Faraway Places nicely in the introduction: “Newspaper accounts or magazine pieces are often about destinations. Boarding Passes to Faraway Places contains travelogues chiefly about the act of movement itself.” (Sibilla xviii) While he still takes time to observe his surroundings and communicate pieces of history to his audience, he focuses more on the traveling itself. This is a book about getting from one place to another, and then another, and then another. It’s an exciting way to draw readers in, and this approach makes it unique among other collections of travel writing.

Boarding Passes to Faraway Places has a very casual tone. It suits the meandering, wandering nature of the author’s travels well. Sibilla isn’t afraid to change his direction at the last minute if something new catches his interest. In the first piece, “Since You Last Departed the Imperial,” he says, “Once again, I would be off to see what I could see.” (19) It’s a simple and precise line that demonstrates the seeming inevitability of his wandering. That inevitability is a charming part of this collection.

As these essays come from the 2000’s, many things in the places Sibilla describes have changed since he wrote about them. From governments to war, some of these countries have gone through extensive transformations. Sibilla’s writing preserves his vison of them in time. Opening Boarding Passes to Faraway Places allows readers to take a peek into a different decade.

Overall, Guy Sibilla succeeds in taking his audience on a journey around the world. His enthusiasm for exploring faraway places is infectious and makes the audience want to jump up and begin planning their own adventures. And that’s what a good travel writer does.

For more information on Boarding Passes to Faraway Places, please visit the author's website at: www.guysibilla.com