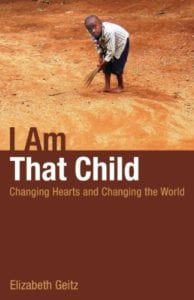 Every once in a while - not often - a book comes along that ‘speaks.’ Throughout its pages the tale makes you cry, get mad, feel envy, feel like a spoiled brat, a redeemer, and want to simply get out of your chair and go save the world. You wish for a Superman cape (and the talents and skills he had, of course) so that in one fell swoop you can save the hundreds of thousands of children out there from poverty and pain. Unfortunately, Superman is a cartoon character - nothing but a creative spark in a man’s mind. However, there are super humans, and in this book you meet one who will grab you by the heart, mind and soul.

Elizabeth Geitz is a woman who, with two other friends, decided to go on a journey. She is an Episcopalian priest and a woman who had adopted a boy from Cameroon. She wanted to see him, she wanted to make a difference in his life - as well as the other orphans who were located in the Good Shepherd Home Orphanage run by Superwoman, Sister Jane.

From the lush, green tropical countryside, past the banana plantations that look lovely and serene, to marketplaces that are so crowded no one can move - the three women traveled up the sides of mountains to reach this orphanage. They traveled with Sister Jane as she dealt with everything from a broken-down vehicle to bribery to checkpoints and men with machetes (and that was just on the ride there). Jane had a way of charming them all.

Jane Mankaa had her own torturous history with her family in West Africa before coming to America to get a handle on how to open the orphanage she wanted to create in her country. Upon her return, she struggled. She is a woman in a man’s word. A Christian nun, she has to put up with everything from people stealing their electric cables to murder attempts on her life. People poison her - or try to - in order to get rid of the woman and her orphanage once and for all.

A steel will and a beautiful soul is not nearly a good enough description for Jane, but the reader meets the children within the walls of this orphanage - the location that is giving them a chance at life in a world where their parents are dying of AIDS, where they are starving, being abused and overlooked. The children tell their stories, as Elizabeth Geitz gives readers a look at her steps - a journey that everyone will give their whole hearts to.

There are over 50,000 children who have abandoned in West Africa. Most of their parents are dead from the AIDS virus, or the children themselves have been left for dead, abandoned, said to be unnecessary, and frankly it brings to mind the well-known saying: “There’s no room at the inn.” But one woman did don a cape. She doesn’t want riches and a pat on the back, she wants to work every day to give these children a better life. And in the back of the book there is a way that all of us can support this truly amazing woman and her children.

Quill Says: “May We All Be One” is the motto of this orphanage, and after getting to know these children and their stories, I hope that motto can be adopted by us all.