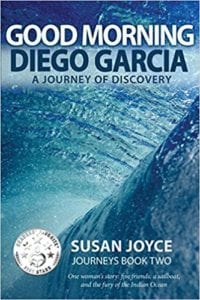 In the second of her Journeys Book Series, Susan Joyce takes the reader on a perilous voyage across the Indian Ocean.

It’s June of 1975 and Susan and her husband Charles enjoy the day-to-day of their quiet lives in Ojai, California. They had only been in Ojai for a few months and managed to settle into a gorgeous home nestled among the hills of Southern California. It was a necessity after their return from Cyprus (and having survived the Coup and war there in 1974). As Susan leafs through the mail one particular afternoon, she is excited to hear from not only their friend Ilene in Malta, but Sabri Tahir; currently residing in Kyrenia. It was the latter letter she was most interested in reading since they had been neighbors in Cyprus. The evacuation was swift and uncertain which didn’t leave much time for drawn-out farewells. Not much interest in the balance of the bundle, Susan is about to set the rest of the mail aside when she discovers an envelope from Taiwan.

Anxious to solve the mystery, Susan tears into the envelope and announces to Charles it is the “English guy Dylan” who she reminded Charles was the boat captain, characteristic of Sinbad the Sailor, and his Israeli girlfriend, Mia. After reminding Charles they were the pair who were live-aboards on the Swedish millionaire’s yacht anchored in Kyrenia harbor, the lightbulb went off. However, Charles was more interested in his video game and wasn’t listening much to Susan’s account until he heard why they were reaching out now. It would seem they were picking up a new yacht and transporting it across the Indian Ocean, through the Suez Canal, bound for a final destiny of Europe. It would be the vessel’s maiden voyage and they were assembling a crew to do so. Charles paused the game and insisted they should join the adventure—specifically, ‘...Wow, it’s like the opportunity of a lifetime...pleasure yachting! Three months of fun and adventure...’ With the decision made, the first of many challenges would be to get there. Through a series of cancelled flights, delays and a fair amount of chaos, Susan and Charles finally make it. Little did they know what lie ahead could cost them their lives, but to compound such possibilities, hindsight would confirm it’s not the wisest decision to set sail at the onset of Monsoon season to cross the Indian Ocean.

Good Morning Diego Garcia is a captivating tale from its inception. Ms. Joyce has a natural flair for dialogue exchange and an innate ability to capture the essence of the moment in her many scenic passages. I’ve sailed many Northern California waters as well as logged a fair share of hours on the Chesapeake Bay and experienced an instant connection to this story as a result. She is knowledgeable in her use of sailing terminology and capitalizes on such knowledge once the crew is underway. Ms. Joyce has a keen eye for detail without dragging the story into ad nauseum and catapults the reader from situations ranging from facing off gale force winds and twenty foot waves to pristine days and frolicking with a pod of dolphins; all the while crossing an endless horizon of water for days on end. I found myself clenching my teeth on more than one occasion during this read. Her character descriptions and their individual quirks make this read all the more pleasurable and credible. I am a fan. Well done Ms. Joyce!

Quill says: Batten down the hatches and brace yourself for an unforgettable journey.

For more information on Good Morning Diego Garcia: A Journey of Discovery, please visit the author's website at: susanjoycejourneys.com