It’s All a Game: The History of Board Games from Monopoly to Settlers of Catan 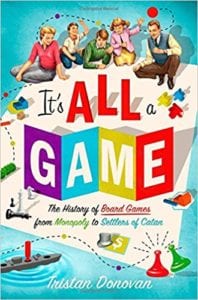 It's All a Game: The History of Board Games from Monopoly to Settlers of Catan

Ever wonder how some of the most popular board games of our time - and of earlier generations - were developed? The history behind them and what it took to bring them to market is quite a story, and one I'd never considered. Author Tristan Donovan explores this topic and his research into these games makes for some great reading.

Donovan opens his book with an exploration of games played by ancient civilizations - games such as "Senet," a game played by the ancient Egyptians. The author takes the reader on a journey of discovery, following the historians and how their findings during excavations changed their ideas of how this game was likely played. Onward from this first chapter, we're introduced to the development of chess and backgammon. From here, the author takes us through the stories of all sorts of games, from "The Game of Life" to "Monopoly," "I Spy," "Clue," up through the modern strategy game of "Catan." Donovan even explores the explosion of plastic games ("Mouse Trap," "Operation," etc.) and what these games say about our society at the time they were developed.

When It's All a Game came in for review, I was intrigued by the topic and added the title to my "to read" pile. This non-fiction exploration of board games was a nice, and unique, change from all the mysteries I've been reading lately. I honestly never thought about what went into the development of so many of the popular games of our generation. "The Game of Life" can actually be traced back to 1860 and a young man, Milton Bradley, who was trying to eke out a living as a printer. Beyond the history, which I found fascinating, was how the game changed over time (raccoon coats and uranium mines in the original version were replaced with ...). "Monopoly" too had a humble beginning as a game meant to bring attention to the cruel ways of landlords. Much to the disappointment of the original creator, the "Landlord's Game" turned into something very different. From "Scrabble" to "Trivial Pursuit," author Tristan Donovan has delved into the world of board games and written a book can be enjoyed by anyone who has ever thrown a dice or spun a plastic teetotum (spinning top with the numbers of spaces player can move). Why the dice was replaced by a teetotum during the development of the game says much about the puritanical society at the time - another fascinating story in a book full of great stories.

Quill says: Who knew there was so much history behind popular board games? Reading It's All a Game will open your eyes to the stories behind so many games you grew up with and give you a new appreciation for each one.