Ripley’s Believe It Or Not! Unlock The Weird! (Annual) 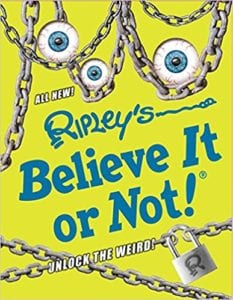 Ripley's Believe It Or Not! Unlock The Weird! (Annual)

This year's theme is "Unlock the Weird" and this book certainly does just that. From octupus wrestling to a 67 inch peacock made entirely out of neon drinking straws, this book has some very peculiar stories that will keep kids and adults turning the pages.

Like the other books in this annual series, Unlock the Weird begins by featuring a few pages about Robert Ripley. Ripley was initially known for his abilities as a cartoonist and as an amateur anthropologist; it was the combination of these two passions that led to the creation of his Ripley's Believe It or Not! newspaper and televison series that featured unusual facts about people, places, and things. In Unlock the Weird, the editors give us a peek at Ripley's Chinese junk, a ship named the "Mon Lei." Pictures and facts about the ship bring it to life that may just get kids to research the history of these interesting ships.

The "weird" facts, stories and photos are sectioned off into chapters that include Animals, Body, Pop Culture, Transport, Feats, Art, and Food. "Feats" was the one that grabbed me this year, with some very cool and fascinating factoids. You've no doubt heard about the "Scorpion King" but this book puts a whole new spin on the "Scorpion Queen"! Beyond the unusual, any reader of this book is guaranteed to learn many things. Did you know that an African Grey parrot was a "lead singer" for a death metal group? Have you ever wondered what happens to road markings if an intense heatwave should hit? There's an amazing photo of just that which will make you take a closer look. And talk about cool photos...the one of "Chameleon People" kept me staring at it for quite a while, trying to figure out where one person ended and the other began. Unlock The Weird is a fun and educational way to spend your time, whether you are an adult or child.

Quill says: Add Unlock The Weird! to your Ripley's collection. Another winner in the annual series that will keep you glued to the pages for hours.