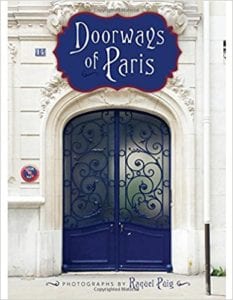 Raquel Puig captures the beauty of Paris via the vast array of doorways throughout the city in Doorways of Paris.

Perhaps it is fair to say doors are the soul to the home as much as eyes are the windows to one’s soul. This is the thought that resonated with me as I turned the pages of Raquel Puig’s photographic journey through her streets of Paris. She has captured the beauty and allure of doorways throughout Paris through her camera’s eye. The book is categorically broken down into the 20 Arrondissements of the city, beginning with the 1st Arrondissement: ‘…the heart of Paris…the smallest and least populated areas of the city…’. Yet, this Arrondissement’s signature displays iconic landmarks such as the Louvre, the Tuileries and the Palais-Royal—all of which share real estate with offices and government buildings. The doors are ornate and stately as much as they project a statement of being. There is opulence as well as subtleties, but the common element throughout this area is a statement of regal elegance.

Ms. Puig continues her photographic journey and transcends from the grandiose presence of the doorways in the 1st Arrondissement and finds yet another layer of beauty in the doorways of Paris in the 11th Arrondissement. Paris too has it’s ‘millennial’ carve-outs and it would seem the 11th Arrondissement is the happening place where ‘shabby to chic’ has found its calling. It is an area where the working-class have found their homes as much as there are pockets of mystery and intrigue; again, all through the allure of magically unique doors that adorn equally intriguing buildings.

Much to my dismay, I have yet to visit this magnificent city, but ‘someday’ is still on my bucket list when it comes to a trip to Paris. In the meanwhile, I applaud Ms. Puig for her fantastic artistry through the eyes of her camera’s lens. I give high praise for her obvious attention to detail. She has done the city of Paris and its multitude of doorways justice in that she pairs the beauty of the obvious with the attraction of the history behind their allure. Hopefully, there will be a next installment of what captures her interest as she walks the streets of her Paris.

Quill says: Doorways of Paris is a must for the coffee table and certainly an invitation to take a stroll along the streets of Paris to admire its many doorways.