Evolution Ended: The Next Stage of American Society 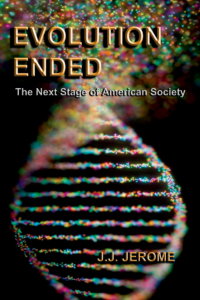 Evolution Ended: The Next Stage of American Society

In his new book Evolution Ended: The Consequences Have Just Begun, author J. J. Jerome has composed a portrait of world history focused strongly on the United States, demonstrating that survival of the fittest as a conceptual guideline for human progress is gradually giving way to a model that embraces unity, yet may soon erupt into the ultimate disunity of civil war.

Jerome begins with a picture of the US in the “cool” 1960s, with John F. Kennedy at the helm, hippies tuning in and dropping out, and a radical invention that would give ultimate control of a major human activity to all who chose to use it – birth control. Throughout humankind’s prior history, the alpha male ruled; his ability to defend himself and his family was key to significant life events – mating, warfare, and governance. Production of and survival of offspring is a basic key to evolution, but today we see an entirely different template than that which existed in the 1960s: children are not allowed to wander outdoors on their own, neighbors are reluctant to interfere in a crisis, and almost half of all marriages end in divorce. Mating is done online, without the physical cues that might affect one’s deeper sensitivities; computers and cell phones allow everyone to express conspiracy theories and cast every new leader in a shaded view.

Jerome examines the hierarchy of alpha, omega and beta personality types, the structure of the brain with the hindbrain, the most basic physical awareness, followed by the mammal or midbrain with its higher intuitive senses, and the forebrain, that brings such advances as written language. He is remarkably objective in positing the differences between America’s two main political parties and the advantages and drawbacks of both, as well as the positive and negative points of science, religion and social media. America, the first government to institute the rule of law above the rule of men, has become a nation at peace with all others, yet a place where children are not safe at school and there is a huge stockpile of privately owned weapons. Some observers predict civil war. Jerome quietly concludes that “it’s not the strongest or the smartest to survive, but the ones that adapt most quickly to their environment.” With our environment, including its climate as well as its complex social/political/technological factors, changing so rapidly, it is time for the cautious contemplation that Jerome introduces.

Quill says: Author Jerome gives readers scope to carefully consider the dangers inherent in the direction that technologies and philosophies in this age may lead us, by describing how they evolved and what they might mean for our future.