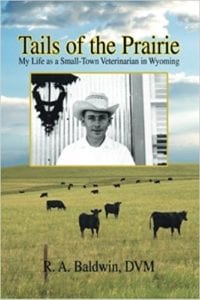 This memoir is by a veterinarian who practiced in the Wyoming ranch country from 1951-1964. His wife, Harriet, had come from Sundance, a small town in northeastern Wyoming. When Dr. Baldwin finished his training, he took over the fading practice of his brother-in-law. Her family helped them buy a drugstore which his wife ran during the four and one half years they spent in Sundance. He had a small animal clinic attached to the store, but had to travel to reach his bovine patients.

At that time, the ancient telephone system was privately owned and operated and if you wanted electricity, you created it with your own generator. Dr. Baldwin did many surgeries using his car lights or lanterns held by the animal's owner. His major problem was the roads. Only the main roads were paved; to reach ranches, he had to take gravel roads and then dirt ones. Many times his clients had to meet him with horses, wagons, or sleds to finish his trip. Some of the horses objected violently to carrying his veterinary equipment.

In the spring, rain temporarily turned the fine prairie soil into nonporous gumbo which effectively stalled cars and trucks. In the winter, blizzards turned unplowed roads into major hazards. On one terrible trip, blowing snow obscured visibility and Dr. Baldwin had to fight the high winds to keep his truck on the road. Near town, he rescued four foolish travelers whose car had been blown into the ditch and overturned.

Much of Dr. Baldwin's time was spent giving routine inoculations and doing health inspections before animals who had been sold could be shipped to market, but he also had to diagnosis some difficult problems. He also had some unusual patients. Once he had to declaw a bobcat who slept on the living room piano. Another time he was held prisoner by an elephant while trying to examine a circus pony. He also had to keep treating a boxer dog who was at war with the local porcupines.

The stories in Tails of the Prairie focus on unusual people and exciting events in a tough environment, but this memoir also has a nostalgic air. By the time Dr. Baldwin wrote this book he was retired and remembering the days when he was young, strong, athletic, and convinced he could do anything. While he at times included excess medical details, he also seemed to be writing for young veterinarians. He's telling them, "See what I had to go through and how lucky you are to be starting practice now."

Quill says: If you are interested in ranching, animals, or veterinary work, this book is well worth reading.