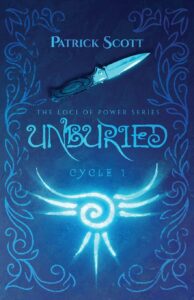 From emerging author Patrick Scott comes his second novel entitled Unburied: The Loci of Power Series, Cycle 1. Unburied follows the story of a typical college student named Faye. Faye is dealing with things that most college girls think about: classes, guys, and midterms. However, there exists one stark difference between Faye and most other college students. Her mother was murdered when Faye was in high school.

Faye’s life has been going as normal as it can for someone whose mother was violently murdered. Her roommates and college friends do not know her story. However, a rapid succession of events leads to Faye leaving college and returning home to her father, with her friends in tow. Faye’s mentor at college has mysteriously gone missing, and her best option at finding her is to enlist the help of her father.

Upon returning home, Faye’s father is happy to help with the search in any way he can. Yet, the events that transpire are not at all what Faye expects. Faye learns some ugly and astonishing truths about the incidents surrounding her mother’s death, including how her beloved mentor from school was involved. When the situation is finally settled, Faye finds herself more at peace than she has been in years.
Scott’s story encompasses a little something for everyone: there is love, action, adventure, friendship, evil, immorality, and dishonesty. The reader will be left guessing what the resolution will be until the very end. The story is not predictable, which readers will definitely appreciate.

Scott did an exemplary job of writing Unburied in such a way to target young adult readers, but to also make it appeal to older readers. Since the main character and her friends are college-age young adults, readers in their late teens to early 20s will be able to easily relate to them. Yet, older readers who have already left their college years behind will appreciate being able to take a trip down memory lane as they experience Faye’s adventures along with her friends.

The ending of Scott’s tale is wrapped up to some degree, but still left open-ended enough that future adventures for Faye and her friends seem plausible. This type of ending will leave the reader wanting and waiting for more. Judging by Scott’s biography, readers will be happy to learn that he does indeed have more exciting experiences planned for Faye and her crew.

Quill says: Scott has penned an exciting fantasy thriller for young adults with Unburied. Readers from young to old will find themselves immersed in this riveting account of a young woman on a quest for answers to questions from her astounding past.

For more information on Unburied: The Loci of Power Series, Cycle I, please visit the author's website at: patrickscottbooks.com