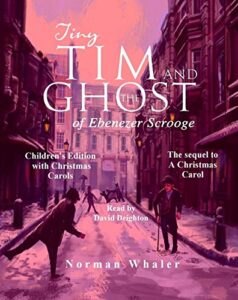 In 2017, author Norman Whaler released his version of a sequel to the Dickens' classic A Christmas Carol, that was appropriately titled Tiny Tim and The Ghost of Ebenezer Scrooge: The Sequel to A Christmas Carol. Now he's taken his love of Dickens' a step further by releasing a magical audio edition geared to young readers.

As the story opens, we learn that:

...a mean, selfish old man named Scrooge
who used to scowl and frown,
had a change of heart and said,
"I won't let you down!"
Tiny Tim's leg was soon mended
and his lonely, unhappy days then ended.

Turn the page and we learn that thanks to Scrooge's change of heart, Tim grew into a healthy young man, happy, strong in faith, and it appears, falling in love. Yes, Tim is in love. But there's a problem - the parents of his true love, Becky, don't approve of Tim. Without their approval, Becky is unable to marry Tim and so, the two must go their separate ways.

As time goes by, Tim grows sad and miserable. "...without his Becky, his heart just grew colder." If this sounds like Tim might be falling into the same unhappy life that Scrooge had before his life-changing visits from three ghosts, you're right. And it appears Tim might just be in need of a ghostly visit from his dearly departed friend Scrooge.

In 2018, I read/reviewed the first version Whaler wrote of the sequel (the print version) to A Christmas Carol, that was, at 100 pages, geared to an older reader than this audio version. It was an enjoyable read and the author did a very good job of imagining what Tim's life was like after that fateful, happy Christmas Day when Scrooge visited Tim's household with the Christmas goose. This new audio version can be easily enjoyed by much younger readers as they follow along with the narrator (a perfect choice of narrator to bring the reader/listener back to Victorian London). The jingle-jangle of the background sounds, horses trotting, carolers singing, etc., really added to the Christmas spirit. Each page of text/audio is accompanied by a lovely illustration that uses soft tones to convey the nostalgia and atmosphere of Victorian London. When I sat down to listen to the audio, I definitely wasn't in a Christmas mood but after listening to the entire story, I was excited to continue on to the Christmas songs that are at the back of the book. The songs, with their print versions included, are delightful and complete the entire audio experience. This is a fun story, wonderfully produced, and children will likely be watching, and listening to Tiny Tim and The Ghost of Ebenezer Scrooge over and over, well past Christmas time.

Quill says: A fantastic holiday book that will get not only children, but your whole family, in the Christmas mood.

For more information on Tiny Tim and The Ghost of Ebenezer Scrooge, please visit the author's website: www.normanwhaler.com