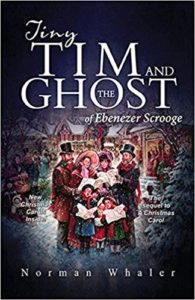 Did you ever wonder what happened to Ebenezer Scrooge after that fateful Christmas day when he discovers the true meaning of the holiday? Did he keep his promise? Did he truly become a changed man? In this sequel to A Christmas Carol, author Norman Whaler creates a believable and enjoyable story that tells us what might have happened.

As the story opens, we learn that Scrooge has just died. Alas, everybody is quite sad because Scrooge did indeed become a changed man and they all dearly loved him. While all are saddened, Tiny Tim is particularly grief stricken because Scrooge had become like a second father to him.

The Cratchit family attends Scrooge's funeral and then tries to return to their everyday, normal lives. Tim now works with his father at Scrooge's company, "Scrooge & Marley & Cratchit," but with so many memories of Scrooge within the walls of the office, Tim just can't concentrate on his job. Sadness and grief overcome him, he loses his faith, and he becomes a truly lost young man.

Next, the reader is introduced to Becky, a young woman who had been Tim's school sweetheart. Becky was from a wealthy family and they had determined that Tim was not a suitable match for the girl. Instead, she was forced into a loveless marriage with a wealthy but cruel man, where her sole joy was caring for her son Jimmy. But when her husband started showing his violent side, Becky made the bold decision to leave the comforts her husband provided in the hopes of keeping Jimmy safe from his beatings. The two found themselves living in the poorest section of London, struggling to find enough food to eat. When Becky's health began to suffer, it appeared all might be lost for her and her little boy.

When all seems lost, Tim is visited by the ghost of Ebenezer. Like the ghosts of Christmas Past, Present, and Future in The Christmas Carol, the ghost of Ebenezer tries to show Tim how blessed he truly is, and that life has meaning. The question is, will Tim be able to get over the death of his friend, find purpose, and perhaps reunite with Becky?

Attempting to write a sequel to a classic such as A Christmas Carol is a bold move and one not many authors would attempt. Norman Whaler, however, does an admirable job of bringing the beloved characters that Charles Dickens created back to life. Like the original, this book is divided into 5 "Staves" (a term Dickens used to denote each chapter - a musical notation). Whaler also sprinkles his text with language that Dickens might have used to help set the mood and includes numerous illustrations, some with a definite Victorian feel, others more modern (clip art). At the back of the book are numerous Christmas carols that are mentioned within the pages of the story. While it is unlikely that any author could match the beauty of Dickens' classic, Tiny Tim and the Ghost of Ebenezer Scrooge does a good job of taking the reader back to old London. Throughout the story, there's a strong Christian message that Ebenezer brings of love and hope for the future, that both fans of Dickens and those who are looking for a good family story can enjoy.

Quill says: Looking for a family Christmas story with a strong message of love and hope? If so, you should definitely take a look at Tiny Tim and the Ghost of Ebenezer Scrooge.

For more information on Tiny Tim and the Ghost of Ebenezer Scrooge, please visit www.normanwhaler.com