FQ: I LOVE the video on your website of Smeagull coming up to your door and knocking! (readers, be sure to check it out at https://www.smeagulltheseagull.com/about). Would you tell us a little about the first time Smeagull came to visit? Any idea how/why he started to visit?

MARK : We first encountered Smeagull sharing birdseed we put out for the migratory mallards who pass through Long Island Sound in early winter. But Smeagull was only eating the corn and only the whole kernels. The next time I saw him he was only eating the sunflower seeds – but only the ones still in their shells. Obviously, a character. I started bringing back scraps from Star Market, our local fish store which of course, Smeagull much preferred to birdseed. He very quickly figured us out – when we woke in the morning, what room we were in, the sound of my pickup, Valerie’s car – and that we could be trained not only to feed him but to feed him the food he prefers. Namely, what’s low down on the food chain - scraps of sardines, mackerel because this food is safe to eat, and because it has a lot of fat and oil content. You see, seagulls eat like polar bears, they crave calories and for the same reasons. Mostly to maintain body temperature.  Now, you may wonder how I knew I was feeding the same bird who first captured my attention. The answer is that herring gulls are as different in personality, their voices, the way they carry themselves and yes, their faces, as we are. It required paying attention, but after a while it wasn’t that hard to recognize Smeagull.

FQ: What first inspired you to write a book about Smeagull?

VALERIE: We both felt that Smeagull was such a good story that we really had no choice but to share it. Here is a wild animal – and seagulls absolutely are wild animals – who chose to adopt us. More than that, he trained us. Any idea that he is our pet is completely mistaken. He fully expects us to understand him, to pay attention to his needs, to be on call when he knocks. And we are. As the book says, he is family. Both Mark and I have spent our lives and our professional careers concerned about the welfare and wellbeing of others. People matter to us, regardless of where they come from or how they dress. My father was a Greek immigrant from a small town on the north Aegean Sea near Pergamon called Dikili. He was a small child when he fled the massacres of Greeks that immediately preceded the Armenian Genocide. It scarred him for life. Mark’s family was decimated in the Holocaust. We both knew our grandparents, but all the others perished. We have an understanding that is bred into us of suffering and loss. All people matter to us. All people, and by an easy extension, all life including animals – wild and domestic, mammals to insects - because both of us see our emotions in their emotions, our suffering in their suffering.

FQ: A bit of a silly question, but what happens when you go on vacation? Do you have to have somebody house-sit so Smeagull can get his food?

VALERIE: We’ve lost at least 70% of seabirds in the last 30 or 40 years as a direct result of humans vacuuming the seas of fish, and so the help we provide to Smeagull is important. Smeagull is after all a wild bird and he can forage for himself up to a point. However, if we are planning to be gone more than a few days we have someone housesit so they feed Smeagull when he knocks. We have a written checklist and we make sure anyone who takes over for us has met Smeagull in person more than once.

FQ: For Mark – you say in your bio that “…seagulls are the best, and the smartest” of birds.” Would you care to expand on that? What endears them to you?

MARK: Gulls in general, herring gulls in particular look you in the eye, attempt to communicate, and are particularly intelligent, on a par in my experience with crows and parrots and in many ways smarter than the smartest dog you will ever own. And Smeagull is a particularly bright herring gull. Consequently when it comes to communication with us, his abilities are amazing. We mentioned that Smeagull has food preferences. Would you like to hear how we found that out? Early in the relationship I remember feeding him this small, fresh, gorgeous little scrap of some kind of white fish. Now by this time he knew he had us. So he took training the humans to the next level. He walked to the edge of the deck and spit the scrap off the edge and then he turned to look at me over his shoulder as if to say, “I should eat that?” And proceeded to indicated what he did and did not like in that same manner, until we got it straight. And that’s not the half of what he knows or how he’s cemented the relationship. One of my favorites was his discovery that, “Mark and Valerie don’t have feathers.” In the summer he often comes very early, just before or just after sunrise. He knocks, I jump out of bed and initially he kept right on knocking while I got dressed. Then he absorbed the “getting dressed” part. The continuous knocking ceased and instead – I figured this out by noticing where he looked – he studied how I got dressed. “Shirt, yup, Ok, got that done. Now the pants. Right, that’s done. Now the socks…” Once he understood the process he just waited till I was fully dressed, and did not start to knock again until I went to the refrigerator. As if to say, “GET A MOVE ON THERE, I HAVEN’T GOT ALL DAY!”

FQ: For Valerie - your illustrations are fabulous! My favorite is the full-page spread where Smeagull is looking straight out at the reader with his beak wide open. How hard was it to capture Smeagull’s essence in your drawings? I imagine he didn’t exactly stand still for you.

VALERIE: Smeagull has been knocking on our sliding glass door for 12 years now. I’ve learned to know him and through him what gulls look like. So I had real familiarity with my subject. I also took photographs to study his movements and proportions and I spent time on the beach just watching, gulls in flight, gulls feeding, and gulls on the water. The drawings took 6 years, mostly because I am a working graphic designer and I was not drawing full time. That said, it was a lot of work and research.

FQ: Without giving the story away, I must ask about “Me-gull.” Have his parents taught him to visit your house, asking for food?

VALERIE: Well, like most animals herring gull young disperse once they are no longer dependent on their parents. They go off and find their own territory. Otherwise they would deplete all the food in one place and they have evolved not to do that. But we did see Me-gull being fed by Smeagull until he was ready.

FQ: Mark - Would you tell our readers a bit about your other book, Salt Marsh Diary?

MARK: I’m afraid I’m the kind of writer who will be revising his work from the mausoleum. To be sure there is some good material in Salt Marsh Diary, things I still like, but that book was published 10 years ago, which makes the stories even older. And I’d much rather tell you about my forthcoming collection, Cardinal Points, True Stories of Life on Earth. It’s another collection of my wildlife stories, based now on fieldwork from all 7 continents. My style has evolved, and the work is virtually prose poetry, written for content of course, but also with great concern for language, and meter, and sonority. I’m the Explorer in Residence at Living on Earth, which is broadcast nationally on Public Radio. About half of these stories have been broadcast on the program, the rest have yet to air so there is a lot of previously unheard and unpublished work. Also, I think I understand wildlife on a deeper level than I did and I have both more experience, and more material to draw from. Perhaps the thing I most want to convey is not the difference between us and animals but the similarities. The commonalities. All life, or rather all life with a face which is in reality a vanishingly small part of life on earth, is more similar than different. From literally hundreds of encounters in the field with everything from insects to elephants, I have found that other creatures presume that we are like them. Just like Smeagull, they expect us to understand them, to pay attention, to realize that they too have a life to live out. And they are right.

FQ: As an author/illustrator team, the two of you make a great pair. Are there any plans for another children’s book?

VALERIE: Mark and I have been married for 30 years. We love each other, more I think as time passes. And we have a true creative partnership.

MARK: We are very lucky.

VALERIE: So in a way, Smeagull is a love story, and a family story, as much about us as it is about Smeagull.

MARK: As to other books, it shouldn’t be a surprise that we have things in the works.

VALERIE: Mark and I have a concept for another Smeagull book. Mark is writing it now.

VALERIE: These books will depend more on illustration than text in conveying the story. One of them which focuses on the plight of refugees, will have no words at all, just images, so that it can be understood by anyone regardless of which language they speak. I think it’s going to be a beautiful book. 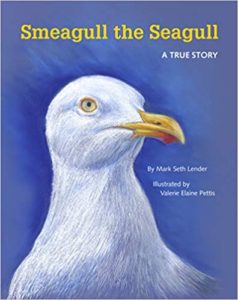