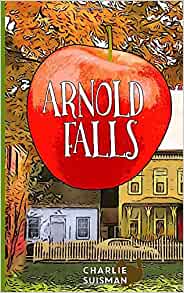 In the ‘odd’ time we’re all living in at the moment, this is one book that brings back fun and enjoyment into the world. The ensemble cast of characters living in Arnold Falls is made up of individuals the reader will literally never forget. The town, itself, is a character all its own; and throughout the entire book you can feel the absolute love this author has for the fictional location he’s created.

Right off the bat, we find ourselves in Arnold Falls never wanting to leave. With the roads practically vacant in this small town, we first get to meet Dubsack Polatino as he jumps off his silver Rascal scooter in order to rip a sign from a lawn – a sign heralding all of the town’s citizens to vote “Jenny Jagoda for Mayor.” After his stops and starts are done and Dubsack has succeeded in pulling up all election signs except the ones supporting the incumbent Rufus for Mayor, he stops behind the courthouse and tosses the rest of the signs into a dumpster.

Dubsack Polatino is only one of many fascinating characters in this town on the Hudson River that is, for lack of a better word, confused. Although the town was founded long ago by a settler named Hezekiah Hesper, the citizens don’t understand why their main street, cemetery, and town, itself, is named after the notorious Benedict Arnold. (This is only one quirk that will be unveiled.)

Jeebie Walker, life-long resident with a fantastic sense of humor, is our narrator. He explains his neighbors as being ones who basically want to avoid anything that could possibly upset their own lives. But, as with most small towns, Arnold Falls has those local battles that continue to happen. From the “haves” versus the “have-nots” that can’t stand each other; to those up to no good living side by side with those who are usually drinking in order to make the days go by faster.

When it comes to Jeebie, he now lives in a house north of town. It was supposed to be a dream house because he was going to move in with the love of his life and be more stable. Unfortunately, Jeebie now has an ex-boyfriend and stability is still nowhere to be found. Recently, he has thrown himself into situations that are becoming even bigger battles. Not only is he helping his friend Jenny try to become the first female Mayor and defeat the incumbent, Rufus, in order to stop the building of a horrific smelling and looking tire factory by the river, but he’s also going to bat for a turkey. Yes, a turkey named Chaplin whose future may include being served up on a platter at Thanksgiving. Add in the fact that a handsome man who has a list of career paths that include orchard worker and cartoon artist is trying to land Jeebie as his boyfriend, well...then you can see how tough Jeebie’s life has become.

When the ‘dark’ world of American politics opens up in this small town, the media descends, and Arnold Falls turns into a fantastical world that rivals that of a fantasy novel. Characters come out of the woodwork, like Duncan who grows vegetables and is the man who Jeebie still has a crush on; Sofia who works behind the bar and gives her opinion even when she’s not asked for it; town gossip, Bridget, who used to hold the title of pickpocket; and the entitled snoot Rufus who believes having a female running the town is more than a dumb idea – and the list goes on.

Following Jeebie, the election, the fights, and getting to know all of these quirky characters who truly care will make you want to re-visit Arnold Falls again and again. So, my advice is to keep this book close at hand. The author should get a standing ovation for his excellent work at combining in-depth characters and their personal emotions, with inane humorous scenarios that include everything from Wiccan parties to real estate developers who are more than a little evil. In a time where we have much more time on our hands than ever before, this is the book that’s needed to make you smile.

Quill says: Miss this one, ladies and gentlemen, and you’ll miss out on something really special!