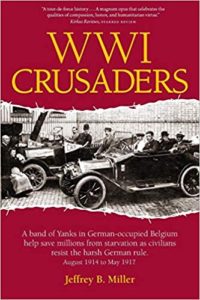 WWI Crusaders offers an interesting look at the CRB - an American-led relief effort in Belgium during World War I.

The book is really two books that came together over time. The first part was published in 2014 under the title Behind the Lines. It described how an unusual relief effort began in 1914 in Belgium. The author rewrote this portion of the story and continued on through the conflicts of 1915, the crises in 1916, and the end of the program in May of 1917.

When the war started, Belgium at that time was a highly industrialized nation whose people imported most of their food. When their country was conquered by Germany, the food situation grew considerably worse. First, the Germans grabbed most of the available food to feed themselves. At that time, farming still required a great deal of manual labor and the German rulers began a series of brutal raids to round up strong men to work on their farms and in their factories. The Belgium population was soon destitute and starving.

Before the relief operation could begin, two crucial diplomatic agreements had to be prepared and approved. First, the occupying authority had to agree to allow the relief shipments to enter the country and not to grab or store their cargoes for themselves. When the Germans attacked, the Belgium forces managed to keep a few ports on their western border free by flooding the land. These ports were being blockaded by the British and they had to agree to allow the relief ships through their blockade.

The relief service was organized into two branches. One was the Commission for the Relief of Belgium or CRB. It was responsible for raising money, buying food, and shipping it to the Belgium coastal ports. It was headed by Herbert Hoover. The second one was Comite National de Secours et d'Alimentation or CN. It was responsible for shipping through the country and distributing to the inhabits. All of its members were required to maintain strict neutrality in both thought and deed. Many American college students were responsible for helping distribute supplies throughout the country.

The author spent years researching this book and his efforts are reflected in the amount of detail contained within its pages. This is a long book (726 pages) and it is full of countless stories that recapture events surrounding the author's large cast of characters. In addition, it includes some stories about the Belgium resistance and the fight against their hated German overlords. The author grew up learning stories about the CRB relief effort from his mother and drew heavily on the records left by his grandparents who took part in it. For those who want a good WWI history read, particularly one with a focus on Belgium, this is definitely a book to check out.

Quill says: Any student of WWI, as well as anyone who is interested in relief organizations, will find much of value in WWI Crusaders.