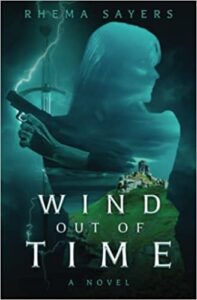 In Wind Out of Time, Rhema Sayers has written a spellbinding story about a modern woman’s experiences in the Dark Ages.

FBI Special Agent Andrea Schilling is chasing a ruthless killer when they both go through a time portal and are transported more than 1500 years into the past. Andrea is like a fish out of water in her mannerisms and attire at the medieval castle Camdhur, home of King Ardur. However, she finds her cooking and fighting skills an advantage in the out-of-the-blue locale that bears a remarkable resemblance to King Arthur’s kingdom of Camelot.

Andrea is torn between wanting to return to her life as an FBI agent and acting upon an unexpected attraction to King Ardur. Andrea’s choices are twofold. One option is to give up her responsibilities and way of life that she has embraced in 2022. A second option is to stay at Camdhur and choose a different path that entails permanent changes in her lifestyle. Which decision will Andrea make, and what is the outcome of her personal choice on the lives of herself and others?

Sayers does an excellent job of pulling readers into a fictional kingdom with her own interpretation of the Arthurian legend. The author masterfully shows the impact on a realm and its surrounding territories when a woman from contemporary times shows up at Camdhur Castle during a period of anarchy and violence. The story is filled with well-scripted, exciting, and intense battle scenes that keep readers hanging on the edge of their seats.

Wind Out of Time is a gripping story in which time travel lays the groundwork for an exciting adventure. It includes the deliberate destruction of property, merciless acts of violence, gruesome deaths, romantic pursuits, personal sacrifices, complicated family relationships, indomitable spirits, and kidnappings.

Sayers delivers an interesting take on all the characters in this fast-paced and action-packed story. It is a good mix of characters with varied personalities. Andrea, the main character, is a fierce and formidable woman who is transported with no warning into a completely foreign environment. Readers can experience the fictional world through the characters’ interactions and reactions to the predicaments in which they find themselves.

The short chapters are designed well, making it easy to keep readers turning the page until they reach the very end. The story is one of triumph, heartache, and passion in the recreated world of Arthurian legend.

Quill says: A fantastic and innovative portrayal of a twenty-first-century woman who finds herself unexpectedly transported into an early medieval period.