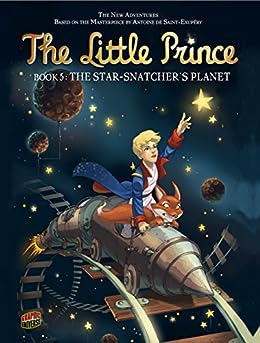 The sky darkened and soon the rain was coming down in sheets and lightning lit up the sky. Claos urged Naomi to head for shelter, but the harvest was important to the village and she wanted to continue. The Cholorphylians wouldn’t “make it through next winter,” so he relented. All of a sudden, the sky opened up and two spiral-shaped object were seen hurling to the ground. Claos and Naomi clutched each other, sure of the end as the ground lit up with an explosive force. Boooom! They survived the explosion, but wouldn’t know for sure what exactly had happened until two more strange beings came through a portal in the sky twenty years later.

The Little Prince and Fox tumbled through the sky until Little Prince transformed a cloak, wrapping them in a cushion that curled into a pod. The pod cushioned them as they bounded into a garden of flowers and rolled down to the ground. Plop! The pod opened and they found themselves at the base of the flowers. The Cholorphylians glanced at Fox who was hanging upside down, hung up in a trap. Claos, who was an old man by then, confronted him. “You fell right into our trap. Your crop-eating days are over!” It took some convincing, but finally the Little Prince persuaded him that they were only in search of the snake.

The snake’s henchmen, the gloomies, were creating havoc on the planet and when the Little Prince worked his magic to destroy them and save Ted, the Cholorophylians relaxed. The Little Prince stooped to listen to the plants, to find out the problem of the planet. The snake was at work and it was obvious he was working through Antoine, the little astronomer. They had to find him, but when they did, something went terribly wrong. The little astronomer was interested in Fox and Little Prince’s planet, B612. He’d been capturing the stars, making the Chlorophylians planet darker and darker. How could the Little Prince save the planet and keep snake and Antoine from destroying his planet and his beautiful Rose?

This is the exciting tale of the Little Prince and the Fox who once again try to foil the evil Snake. The plants, the planets, and the stars are dying because the evil Snake is once again on the prowl. He’s enlisting the help of the Astronomer, the son of Naomi and Claos. This is a fast-paced, graphic novel that will excite young readers, especially reluctant ones interested in fantasy. The artwork is stunning and the fantasy panels will have definite appeal to the young reader. In the back of the book is a short story, “The Little Prince,” as imagined by Pierre Makyo, a brief biographical sketch of Antoine de Saint-Exupéry, and a brief discussion about the series, and the adaptation.

Quill says: The Star Snatcher’s Planet is the fifth in a new series about the Little Prince, a graphic novel that is sure to excite young fantasy readers!