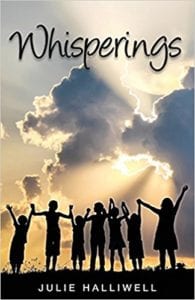 In an enchanting tale of good versus evil, Julie Halliwell resurrects the archangels in her debut novel, Whisperings.

Michael, the archangel, protects against all forces of evil. Is it fate that Miguel, Jibreel and Rafael have embarked upon their respective journeys to make the world a better place of courage and hope? Perhaps it is more than fate.

Miguel lives in the Mexican countryside. His work consists of long days from sunup to sundown conducting back-breaking work in the fields. His pay is small and the drug cartel he works for could care less. They have product to be harvested and that's what matters most.

Halfway around the world, Jibreel is a young Hindu girl trying to make a better way. School is forbidden for the children in the small village near the Hindu Kush mountains. This, however, is not a deterrent for Jibreel and her young sister Hila. They are in search of purpose and the evils of the Taliban will not take this notion away from either of them. The very essence of Hila's name means 'hope.'

Rafael is a young African boy. He lives in one of the richest countries on the mighty continent of Africa, the Democratic Republic of Congo. He is a goat herder and spends his days tending to his herd and often ponders his purpose.

Each of these humans have been chosen by a higher power and in time, clarity will resonate for them to make the difference they are intended to achieve. Miguel learns he is named after the archangel Michael; the glorious protector against evil. Jibreel is named after the honorable messenger Gabriel. Rafael was named after the God of love.

Yuri is the conduit that will bring the three chosen together to launch his international peace project. He is privileged and six years earlier, his life consisted of a free-spirited enjoyment in a life as a university student in Moscow. Originally from the Ukraine, he lived a simple life on his family farm until oil was discovered. His life changed from humble beginnings to belonging to a family of great wealth. Unbeknownst to him, he would be the chosen one to unite Miguel, Jibreel and Rafael to solidify their quest of making the world a better place - a place of courage and hope for generations to come.

Julie Halliwell has penned an inspiring body of work. Her direct approach in focusing on the premise of Archangels and the power of belief is poignant throughout this novel. She uses simple language and realistic events that plant a seed of believability across the pages. There is heartache as much as there is victory in the scenes she sets that are anchored with credible dialogue. I applaud Ms. Halliwell for her patience in laying the groundwork through her worlds and delivering the premise of hope to anyone who is willing to embrace the story. The takeaway is a strong message of belief and faith. Well done Ms. Halliwell. I look forward to your next book.

Quill says: Whisperings is a novel of hope and new beginnings that encourages the reader to have a little faith and a whole lot of belief.

For more information on Whisperings, please visit the author's website at: juliehalliwell.com