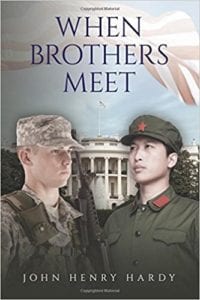 The snow is falling outside the Oval Office windows in the year 2041, as the latest national crisis breaks out. The person sitting behind the Resolute Desk, however, goes by the name, Madame President Constance Higgins. This is a woman with a great deal of experience and not a whole lot of patience for people who try to disagree or go over and around the law. She has just had the mantle of President passed to her, and with it came an immense amount of garbage that her predecessor and their administration left behind. Now, here she is, sworn in as the fiftieth president, and about to head to her first cabinet meeting hoping for answers.

It is at this meeting that Madame President brings up many topics and speaks the absolute truth about all of them. Everything from the overpopulation of the U.S. because the southern borders were not secured by previous administrations to the higher number of people on Welfare, is addressed. From Social Security turning almost invisible as well as how the strength of the U.S. military has been cut in the last ten years in order to save money, makes everything even worse. It seems that the U.S. has received an ultimatum from the Chinese government: The Secretary General of the Communist Party of China, Zhang Li, insists that the U.S. pay their debts in gold rather than dollars, if what’s currently overdue in interest payments is not taken care of within ninety days.

Secretary of Defense John Mahood feels that money is not what this is actually about. He believes there is something far worse going on. As the only one offering a helpful suggestion, he tells the President that since Zhang Li has given them ninety days to comply, they should not do so. If at that time the Chinese do not go forward with their threats about gold versus paper, then they have revealed something far worse is actually up their sleeves. Mahood is right in his assumption. What is being planned is a scheme of monumental proportions called Operation Dragon, where the U.S. will have to face another battle.

Back in the ‘real world,’ Mike Dalton is the perfect male specimen. Not only is this guy a heartthrob for all the young ladies who call the Columbia University, NY, campus home, but he also just won the NCAA championship with his winning basket. Sean, Mike’s younger brother, also loves his sibling but is envious of the attention he receives. Worse, he hates Mike for his relationship with Kyla MacGregor. A girl from Scotland, she is pre-med, highly intelligent, and equally as stunning as Mike.

When a family fight ensues that leaves the “golden” son to graduate top of his class and head into the U.S. military, the feeling of guilt at what happened with his brother goes with him.

So what does a patriot of the U.S. who has had an argument with his brother have to do with the Chinese military moving into the U.S.? And who is NSA Agent Jim Hawkins, and what does he uncover about the Chinese government under a table through a trap door inside a restaurant in Chinatown? These answers cannot be given here, but you will simply note that this is one fast-paced, powerful story with questions galore.

The author has done a wonderful job keeping the thrills happening while telling the tale of brothers who are on an emotional path that may make going to war look like a walk in the park.

Quill says: Readers who love everything from history to war to family sagas that hit you directly in the heart, will find that this book answers each and every call.