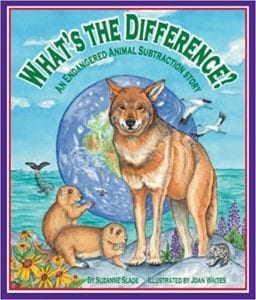 Beautiful blue Karner butterflies flit among the lupines on a beach dune as two children frolic nearby in the sands. These insects once lived in an assortment of habitats, but “these habitats are now rare” and this species has been added to the endangered species list. People are trying to help in as many ways as they can to supplement and restore their habitats. There are many reasons that animals become threatened or endangered. Sometimes, as in the case of the spotted Mississippi gopher frog, their habitat was destroyed when people came in and cut down the “longleaf pine forest homes” where they thrived. Animal populations become depleted when their habitats become polluted, or when they are over-hunted or fished. When people become aware of the dire consequences to our wildlife population, a bit of knowledge can go a long way in helping them!

In this book you’ll be able to take a look at a dozen species people are banding together to save. These include the gray bat, the whooping crane, the American crocodile, the red wolf, the Mississippi gopher frog, the Southern sea otter, the Utah prairie dog, the bald eagle, the West Indian manatee, the Karner blue butterfly, the Atlantic salmon and the Bowhead whale. Each of these creatures is carefully, but briefly discussed in an offset sidebar. A subtraction problem to solve and a poem is included on a two-page spread. “Eight graceful butterflies / soaring way up high— / three stop to rest their wings, / How many in the sky?” You will learn how many of these creatures became endangered, what is being done to protect and keep them safe, and in some cases, you’ll find out if their numbers have increased.

This storybook format is a nice way to introduce the concept of threatened and endangered species to the young child. For the older child, there is the extra little challenge of a subtraction example. The sidebar material that discusses the animal could be read by the more confident reader, but is probably of more use to the parent or teacher who can use it for read and discussion purposes in the homeschool or classroom setting. Each and every one of these fascinating creatures could be further explored in a report by an elementary school student. The artwork is beautiful and very appealing. In the back of the book is an expanded activity section with an “Endangered Animal Vocabulary,” a brief discussion on “Food Chains & Webs,” a pyramid style illustrating the results of a disturbed or disrupted habitat, an “Endangered Animals” quiz based on the text, and additional simple number problems. Additional teaching/learning resources for this book can be found on the Sylvan Dell Publishing website.

Quill says: This introduction to endangered species will appeal to and be of interest to a wide age range of children!