Walking with the Enemy: A Testimony 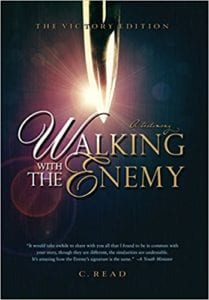 Walking with the Enemy: A Testimony

In the world we live in today, it is not that difficult to come across a news story that is pure evil. What is amazingly difficult, however – as well as frightening – is the fact that because of so many horrific events, people are hardly batting an eyelash when the next one hits the headlines. It is rare to find that glimmer of hope...a story that, although wrapped in horror relates how a person walked through darkness in order to see the light through the power of her faith in God.

Not unlike the Branch Davidians who suffered death and destruction by following the teachings of a demon by the name of David Koresh (who, unfortunately will live in all of our memories for a good, long time to come), this woman discovered her faith only to find herself immersed in a Bible study group that was all about lies. A collection of people who most definitely fell under the definition of “cult” and not an actual loving group.

C. Read is not a flighty woman, by the way. We are talking about a member of the United States Marine Corp. who found her way and committed her life to the Lord in the fall of 1979. A Marine, whom she had never met, came up to this woman, handed her a Bible and walked away. This was the moment in time when C. Read began studying Jesus and walking down a path that had everything to do with living a life based on faith. For three years Read was a part of a Bible study group with members and “leaders” who she had grown to love and respect. When lies were uncovered, however, and the truth was revealed about evil things these people were doing and saying, that respect and trust was lost.

In this book, readers are given her testimony. She explains various meetings and offers up a variety of letters that went back and forth between her and the leaders/members of the group, as well as letters that her husband penned when it came to his outlook of what was going on. She shows how Bill and his ministry strived to get her back within the confines of the group, and how much they wanted to get her back under their control so she would not release the truth about them and their teachings to the rest of the world. She offers up many experiences; she also includes a section of End Notes that give extra information on the events she talks about, as well as the scripture she quotes.

Readers will note that this testimony – the unveiling of secrets, etc. – takes a while to be told. For approximately the first 100 pages of this book, the reader is given many of the letters to read that do not exactly get into the facts. Instead, these are letters stating who was right and who was wrong, and why. There are also apologies by the author to friends and family, as well as a great deal of scripture references before getting to the exact details of what occurred.

In the end, this is all about one woman’s enlightenment, and she does a good job of bringing hope and restoring faith to readers who perhaps have misplaced theirs along the way. Whether you are a believer or a critic, C. Read’s testimony is something you should “listen to.”

Quill says: This author should be commended for bringing her struggle to light in order to make others aware of the evil that is still, unfortunately, operating among us.

For more information on Walking with the Enemy: A Testimony, please visit the publisher's website at: www.truelightpublications.com