Under My Hat: Tales From the Cauldron 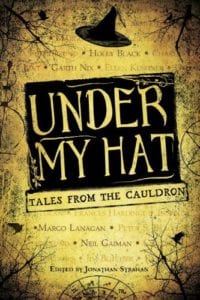 Under My Hat: Tales From the Cauldron

For anyone who is a lover of the world of witchcraft, and admires those little darlings who wear the black, pointed hats and have that feline as their familiar - these are the tales for you! A ton of beloved novelists from the fantasy realm have come together, each offering their own story about the witch-‘y’ women we have come to love.

As we all know, just like the dove is the symbol for peace and the red, white and blue is all about America, the witch has her own symbols. But what is most interesting is that these authors have shown that the females of sorcery can be found anywhere and everywhere in the world with this collection of tales that entice and intrigue.

Beginning with Stray Magic, which offers a look at a no-kill shelter that’s saving ‘familiars;’ to a bailiff looking for revenge; to bff’s who live in a frightening trailer park, discover magic, and must be protected by Uncle Crusher; to a girl who was a cat; a girl who’s mom was a witch; to a tale by Garth Nix, called, In a Handful of Ashes that has readers following a girl named Mari who’s growing up in the servant’s quarters waiting on the very snooty schoolgirls who should never test the lines of magic - every adventure is covered. Authors like Tim Pratt, Ellen Kushner, Jim Butcher and more are the fantastic brains behind these unforgettable stories. There is even a poem included written by Neil Gaiman that is awesome.

Just in time for Halloween, readers receive everything from the dark to the comedic with a splash of horror thrown in for good measure. You’ll love these stories!

Quill Says: An entertaining homage to the ladies in the black pointy hats!