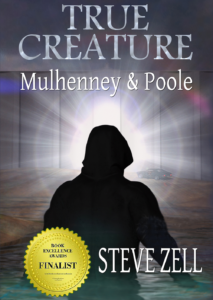 Author Steve Zell has created a twisted tale that centers on vengeance, memory and the mystical powers of water in his newest book, True Creature.

Set in and around Phoenix, Arizona, Zell’s book intertwines a number of stories flashing forward and back in time. In 1968, Todd Worwick is running for senator. His campaign manager, Sondra, is getting more involved with Todd than she probably should. Todd’s beautiful, almost-teenaged daughter Cassandra is conflicted and confused since her mom, Susan, has inexplicably retreated to a desert hideout. Deanne is an investigative reporter who, recognizing that Todd and Susan’s estrangement could be a big scoop, is trying to wangle an interview with Susan, but in the meantime, she’s contacted by a woman named Sara, a medical official who’s just performed a couple of weird autopsies. Sara feels sure the two deaths are related: two men have drowned in places miles from any source of water.

And water, it seems, is the focus of everyone’s lives, since they live in a dry region. Todd is campaigning on his promise to open up a new water source for the state. But when Deanne questions Susan, she learns that Todd is trying to dam up the very lake where his brother drowned in the 1950s—and that may not be all the supposedly squeaky-clean candidate is covering up. Deanne determines to find out Todd’s connection to the monstrously huge, superhumanly strong man known as Red Hawk. A rogue Native American, Red Hawk is so powerful that, as Deanne will discover to her horror, he has no hesitation in ripping a human head off its neck in a few short twists.

Steve Zell is no stranger to suspense with a fantasy spin. Horror thrillers Running Cold and Urban Limit have established him as a talent in that genre. He is also a keen observer of his environment, the dry dusty southwest US where he grew up and where he still loves to seek out strange, sacred or profane places and delve into their ghostly past. In this book he contrasts the bright lights of an urban political campaign with secrets trapped deep in a disused mine shaft or under the surface of a deceptively placid lake. His characters are full-blown and believable: attractive but macho-tough Sara; lonely, career-driven Deanne; fatherly but possibly manipulative senatorial hopeful Todd; Donovan, a lovelorn teen who is a lot older than he thinks; and Barney, who keeps a shrine in the wilderness to a long-lost love, swearing revenge. Zell is at home with lively dialog, whether among kids at an amusement park or grown-ups in the throes of building passions. He also keeps a tight grip on scene and time changes, so there is no doubt where and when we are as we follow along in this fast-paced tale, enthralled.

Quill says: Zell’s fans will want to grab this one, and new readers of his work will be entranced by his settings, people, and most of all his eerie, unchained true creature.

For more information on True Creature, please visit the author's website at: www.talesfromzell.com