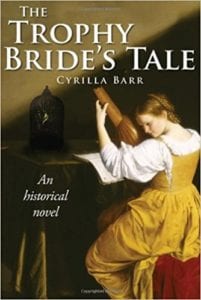 With a scaffold looming in the distance under the blistering heat of an August day, a person is pushing through a crowd of onlookers who are just waiting, with bated breath and smiles on their faces, for the big “show” to begin. There is actual bunting hanging from the place where an unjust wife is going to lose her life for taking the life of her husband, and the person pushing through the crowd is practically in tears because of the huge injustice that is about to take place. This review begins with this lead in to show the extremely powerful and dynamic nature of this superbly written novel.

Not macabre – but, reality – is what a young woman by the name of Prudenza experiences in the year of our Lord, 1534. The Lady Prudenza was born on the shores of the Adriatic in Ancona. She has auburn hair the color of a reddish-gold sunset, and eyes of blue-green that match the beautiful scenery that surrounds her in her peaceful world. Prudenza is a dreamer, and a girl who loves her parents with all her heart. Her mother is a wise woman who loves her, but is also very much afraid that she is too much of a dreamer; she wants to see Prudenza get out of her own head and put her feet firmly on the ground. Her father is the man Prudenza truly adores. He takes her with him to work, where he mixes and sells dyes to silk merchants. Prudenza thinks of her father as an alchemist, in a way, because of how he works his “magic” to produce such vibrant colors using a special elixir called alum.

As her father begins to agree with her mother, Prudenza is sent to a convent school at the age of thirteen. On the steep climb to San Salvatore, Prudenza can barely breathe as the huge fortress appears before her young eyes. Although the school certainly looks like a prison with its gray, thick walls, the people inside are truly sweet and caring. Prudenza meets up with Coletta – a student at the school who spends her time in her herb gardens learning how to mix the best medicines and elixirs for just about any ailment. In addition to her new best friend, Prudenza also meets Fra Tommaso, who is a teacher of music that she finds herself filled with respect and admiration for. He is also the man who teaches her to read and write music so that she can play compositions on her golden lute, which is the gift that she always carries with her that her father bought for her to play.

One day, after two happy years at the school, her father reappears and takes her from the convent without any explanation. It seems his business is going under. The alum that he needs for his famous dyes is not being sold any more through the “proper” channels, and he needs Prudenza’s help at home. Soon a man appears on their doorstep named Matteo Cecchi, who is the son of one her father’s friends. Matteo has found a way to get the alum that is needed in order to save his own father’s business, as well as Prudenza’s father from starvation. However, he needs a great deal of money to get the “process” going. Matteo is willing to waive a dowry, which means that he will take the money set aside for Prudenza’s future husband, and also Prudenza as his wife, in order to get the product that her father needs. A bargain is made, and Prudenza is soon sent to Florence with her new “master” in order to save her family’s business.

The story unfolds well and, sometimes extremely painfully, as the reader watches Prudenza having to sacrifice herself to a man who doesn’t care about her. All Matteo “sees” when he looks at her is the ultimate trophy wife, who is simply beautiful on his arm and nothing more. Not to mention, he is quite demanding when it comes to her wifely duties. The story of Prudenza, her old friends from the convent, her father’s mistakes, and more, make for a somewhat harrowing journey through a young woman’s life.

Quill says: This will remind readers a bit of The Burning Bed, a headline-grabbing story about a woman solving her domestic abuse situation by taking “out” her punisher. This novel, although fiction, is actually based on a very real case of murder, abuse, and the justice system that was prevalent in sixteenth-century Florence. Ms. Barr’s extremely fantastic attention to detail and historical research makes this book a must read. She certainly puts on paper the love, determination, and power that played a huge part in gender politics a very long time ago.