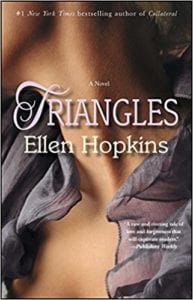 Three females are hovering around the dreaded age of forty, and each and every one of them seems to be falling apart in as many ways as humanly possible.

Holly is about to turn forty and has a devoted husband who loves her and is a good provider; three healthy children; a VERY financially stable life; doesn’t have to work a day, and…she hates everything about it. As a young girl, books were Holly’s freedom, until she found herself enclosed in a “cubical” in the corporate world and everything turned from exciting to boring. When she married her husband - a very responsible and popular lawyer - they had children, and suddenly Holly felt like a woman who had never realized any of her dreams. So, Holly began to work out, run five miles a day, and become a beautiful “goddess-like” woman. When she heads out to the bars with her friends, she soaks up the fact that all the men’s eyes are directly focused on her. Between her brief affairs and outlandish flirting, Holly is also thinking of writing erotic fiction to make some cash of her own, and find something that will save her from the absolute boredom of her life.

Marissa has a “crap life, lousy children, a troubled marriage, and, quite frankly, thinks God must be laughing himself silly over the life he gave to her.” Her son, Shane is gay; her husband sleeps in another room and drinks more than anything else; and, her poor little daughter, Shelby, was born with a debilitating disease which makes Marissa’s life a living hell. She even says, many times, that she wishes she’d never had Shelby in the first place. Maybe then, she’d have a life.

Andrea is a single parent and best friend to Holly. However, Andrea is really sick of listening to Holly whine about absolutely everything - considering the woman has everything. Andrea is raising a thirteen-year-old daughter, and trying to rise in her career at the DMV. She deals with many issues besides her moronic girlfriend, including dealing with her ex, and trying desperately to find something that makes her feel good in life.

Each and every woman crosses paths and finds themselves with serious midlife crises. From children to sex to marriage to pain to death…the whole rainbow of emotions are making them each a little crazy. Sometimes they want to explore new heights, while other times they want to “run away” from everything and start their lives all over again.

This author writes, once again, in her signature poetic verse style, but definitely steps away from the 'YA' category as she takes on the tough subjects of forgiveness, betrayal, hate, and friendship. This book is not for, shall we say, the “weak” of heart. When it comes to risqué, Triangles is that and more. And, the writing is so well done, that most of the time readers will absolutely hate the women they’re reading about. The depression, the greed, the ridiculousness they feel for their families, their constant whining, and the type of somewhat slimy thoughts and emotions they represent will have readers voicing their opinions and heading to opposite sides of the fence for an all out debate.

Quill Says: The plotline is intense, but does have brief moments of happiness and light that leak through the bitterness and anger that these women possess.