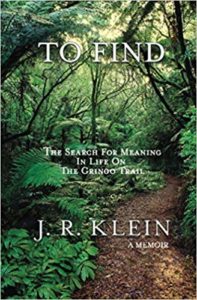 In the early summer months of 1980 in Baltimore, Maryland, author J.R. Klein (known as Alex Moreau in this memoir) had just recently completed a doctoral degree from Johns Hopkins University; the world was his oyster. Instead of feeling energetic and motivated to begin a new life free of the shackles that come with studying, and open to a new world full of possibilities, he felt stagnant and burnt out. Yes, he had everything, a job, a girlfriend, a good life, everything that he worked so hard for, but something was missing; he realized it wasn’t what he really wanted out of life. A life of science was not what he truly desired anymore, what he really dreamed about was to be free, perhaps be like his friend, Stefan (the only person who truly understood him), a wanderer and avid photographer. So after a night out with friends, an impulsive decision was made together with Stefan; they were going to embark on a trip to Central America, leaving everything behind to escape the stark reality of life in search of a new meaning.

The explorers’ adventures began with only a few hundred dollars in their pockets and a Ford Pinto they had to deliver to Texas. After that they used a combination of lengthy sweltering, bumpy rides on dilapidated buses, (including riding on the roof of a bus, witnessing a woman giving birth inside), old worn-out trains, and good ol’ hitchhiking to wander their way into Mexico and down throughout the Gringo trail. Although the travelers had no specific plans, pressing on and experiencing every sort of small, poor town, wild jungle or big city was an overall goal. Despite being quite dazzled by the town of San Miguel, nearly getting swept away in a deadly hurricane, and even being shot at by machine guns while huddled in a tent, Alex continues his travels experiencing as much as possible in search of answers his soul seeks. Along the way the duo meet quite a few fellow adventurers, as well as several locals who all play an integral role in shaping their experiences, both positive and negative, on the trail. Of particular note is fiery and spirited Yvette, an Australian who catches Alex’s eye and quickly becomes his lover. They eventually embarked upon their own journey that took them deeper south into Central America, including an eye-opening and mystical stop at a Mayan temple, and back north 101 days later. Upon his arrival back home the author finds himself with a renewed sense of purpose, ready to return to his previous life.

To Find is indeed a memoir, a telling of a person’s life experiences. However, what sets it apart from the deluge of other memoirs that are vying for attention on bookshelves everywhere is J.R. Klein’s masterful ability to not merely tell readers what happened to him in the summer of 1980, but to thoroughly engage them with such vivid descriptions of his travels in Mexico and Central America that it hooks readers from the beginning, and takes them on an enjoyable odyssey throughout the book to a simple, yet satisfying end. Readers easily feel as if they’re one of Alex Moreau’s fellow amigos riding alongside him in sweltering hot buses through deserts and jungles with the ultimate goal of experiencing everything life has to offer, and finding oneself.

Quill says: Tired of the daily humdrum in your life and seek to just get away from it all? Be an armchair adventurer as you follow author J.R. Klein on his whirlwind journey to find himself in 1980’s Central America - you won’t regret it!

For more information on To Find: The Search for Meaning in Life on the Gringo Trail, please visit the author's website at: www.johnrklein.com