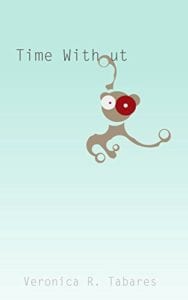 For those lucky enough to have read Veronica Tabares’ last title, Gray Zone, about a cyber-prank gone wrong, you’ll absolutely LOVE Time Without.

Vanessa is a woman who just happens to have the ability to travel through time. Once, she even traveled through time and the scientists in the future wanted to keep her there in order to protect the time line. But when they found out she was to be the mother of the eventual creators of time travel, they had no choice but to send her back to the 21st-century. Giving an oath, Vanessa swore to keep quiet about what she’d seen.

Thus far, this morning, Vanessa has been “lost in a dream” about a castle made of cake with towers of white icing. She had been arguing with the stingy owner about which parts she could eat when the ringing of her telephone pulls her from the scrumptious dream. When she answers this annoying ring, she finds a doctor on the other end telling her that her husband, Tony, has been in an accident.

In 3027, a loving couple by the name of Philip and Annabel Jensen are living their own lives. Philip loves his wife but right now is really angry that he has been turned down for the job position of Chief Scientist of the DTA lab (Department of Temporal Adjustment), even though he’s the most qualified applicant they have. He believes he’s being penalized for his “Adonis-like” looks. (It’s rough to be the smartest of all yet your stunning high cheekbones stop your road to success, isn’t it?) Very upset, he asks his super-intelligent wife to make a small ‘jump’ into the past to ‘tweak’ the course of his future so that he will land the job. Annabel is frightened of doing this, considering any small hiccup could alter the entire time line, but she loves her husband. Besides, what he’s asking her to do is miniscule and shouldn’t really have any effects if done both quickly and correctly.

Once again we are with Vanessa in her delightful dream. The phone rings in her 21st-century house and a very odd doctor who will only talk to the “man of the house” because those are the “rules,” needs to tell someone that her husband, Tony, has been in an accident. Seems that a small ‘tweak’ made by a loving wife in 3027 has completely altered Vanessa’s life. She must suddenly embark on a journey to change things back to what they’re supposed to be. Because if she and her children fail, it’s very possible the eventual creators of time travel will end up working at KFC instead.

Quill says: This author continues to write stories that are fun, uplifting and highly, highly intelligent. You’ll have a ball with this one!

For more information on Time Without, please visit the author's website at: veronicatabares.com