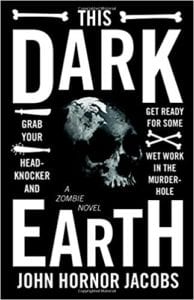 Lucy is having a really bad day. A doctor at a clinic, she's just diagnosed a young woman with cancer. How does Lucy tell the young woman that she will miscarry? Lucy doesn't exactly have a good bedside manner. At the same time, however, the waiting room at the clinic is breaking out in chaos. People are eating their lips, fingers, and a few drop dead. Not quite a typical day.

While the reader will instantly recognize the odd behaviors of patients as hints that zombies will soon be roaming the area, Lucy and her fellow doctors are slower to recognize the threat. Lucy, Robby (another doctor), along with a mother and her infant, manage to escape right before the military swoops in and destroys the clinic, and then the whole town. Fleeing for their lives, Robby, the mother and infant don't make it very far, but Lucy, determined to get home to her husband and young son, Gus, manages to survive. She is picked up by Knock-Out, a trucker with a gentle heart, and it is he who first brings up the word "zombie." The pair seek shelter right before the whole place is vaporized.

By the time Lucy is able to get home, her husband has fallen victim to hungry zombies. Gus is found hiding and together with his mother and Knock-Out, they flee from the encroaching multitudes of "Shamblers." Along with other survivors, the trio builds Bridge City, a refuge built to protect the living from the zombies. Life is hard, and threatened every day, and gets even worse when the inhabitants learn that "Slavers," escaped prisoners who enslave women and torture and kill men, are heading their way. Can Gus, and his rag-tag band of fighters, ward off the Slavers and zombies?

This Dark Earth takes place over a five-year time period. Many of the chapters are told in the first-person, each by a different member of the main cast. This method may at first seem odd but it works well with this author and the even, fast flow is never lost. Speaking of "fast," the book is action-packed and takes off on the first page. The characters, particularly strong-willed Lucy, are interesting and have a certain depth that isn't often seen in horror novels. The book is definitely not for the faint hearted as there are scenes of torture and other grisly acts throughout, but zombies are not nice folks, so why expect a lot of fluff? This book takes the zombie genre beyond the simple, "run for your lives/escape the zombies" plot to a new level of trying to live in a future world where zombies are a fact of life.

Quill says: Fast-paced and well-written; an excellent novel about a dystopian society with lots of creepy zombie action. If you like zombie stories, then don't miss This Dark Earth.