There Was An Old Monster! 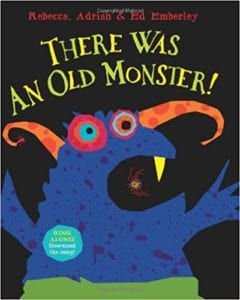 There Was An Old Monster!

The big wide-eyed monster's eyes got even wider when he swallowed a tick. YUK! It made him just plain old sick. Well, he decided he would swallow some ants to try to catch that tick, but it didn't help one iota. The only thing that did was "had him dancing in his pants" because ants make you do those sorts of things. Next he tried swallowing a lizard to catch the ants. Mistake. He still felt sick. He tried a bat, a jackal, and a bear. Was anything the monster swallowed going to make him feel better?

"There was an old monster
who swallowed a tick.
I don't know why he swallowed the tick
`cause it made him feel sick."

This is one monster story that won't scare your preschooler, but rather will keep him or her calling for more. The artwork is extremely vibrant and delightful. The cumulative story in rhyme is reminiscent of "There Was an Old Lady Who Swallowed a Fly" and will get your preschooler giggling and asking for more. I downloaded the song on the Scholastic site. It was more like a rhythmical recitation than a "song," but it is utterly adorable and catchy. Scritchy-scratch, scritch, scritchy-scratch.

Quill says: You're going to wear the pages reading this one over and over again!