Theo and a Horse Named Rocket 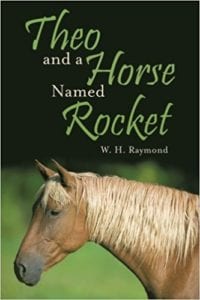 Theo and a Horse Named Rocket

The one person young Theo held in regard above all others was his beloved grandpa, whom he called Gramps. Even though his family lived in the middle of a busy city, Gramps was always finding places to take Theo that brought both of them close to wilderness. On one trip they hiked up mountains in Colorado during the winter months where the snow covered the ground and the wild sheep blended in with their white coats. Then they switched gears and took a trip to Miami, Florida. In Miami they encountered the intense and sometimes dangerous life of animals as predators were hiding everywhere. In all of these wonderful trips Theo was constantly asking questions and loved the time with his grandpa where he learned so much from the information his Gramps had gained over the years. There was also a trip these two took together that was a little closer to home that brought them to a place called Three Pines Ranch. Here is where Theo was introduced to a palomino gelding named Rocket who just captured Theo’s imagination, as he was amazed that an animal that large could be controlled by a human on its back.

However, when Theo’s grandfather suddenly passes away, Theo is left with a hole in his heart that he cannot seem to fill with anything else. His grandfather was the sole person who could help him see the wonders in life and with him gone Theo is having trouble finding anything enjoyable in his world. On top of that, his best friend and neighbor moves away to Colorado with his family, leaving Theo utterly alone to face life by himself. He has no interest in the subjects in school and the constant bullying from other students continues to tear down his confidence. As his grades drop and interest in life declines, his parents become worried that they won’t be able to find something to help bring their son out of his depressing state. The answer will come from an unlikely friend and a sweet horse from Theo’s past that no one expected.

This story presented a quite relatable character in Theo and I instantly enjoyed reading about him. I also found myself wanting to help him though this hard time in his life. In that regard the author, W.H. Raymond, did well in creating a character and story that pulls at the heartstring and pulls the reader in effectively. The one critique I would have for this story is that the title is slightly deceiving as the main focus is on the character of Theo but only a small portion of the story included that horse named Rocket. So, in hindsight, after reading this book I did expect more mention of Rocket based on the title. Overall, however, I found this to be a very enjoyable read.

Quill says: A story with a sweet relatable character that pulls at all your heartstrings.