The Wolf of Tebro: Gates of Heaven Series (Book 1) 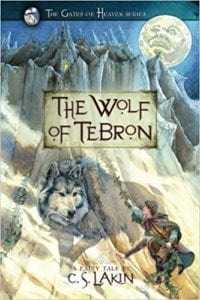 The Wolf of Tebro: Gates of Heaven Series (Book 1)

Rhianne’s spirit had gone, but her grayed eyed babe resting in the cradle knew nothing as his father wavered between his grief for his wife and concern for the safety of his son. The wizard created a cocoon to keep the evil from entering his son, Joran. He called to the bear to take the child to a safe haven in Tebron. A new mother and father, Oreb and Shyra, took in the child, a child who would always be strangely different from other children, one who didn’t look like his three brothers or sister. Joran noticed he was able to mindspeak with animals. It was an unusual happenstance and “He did think it odd, though, that most animals wanted to speak with him, whereas they bluntly ignored the rest of the villagers.” It would prove to be a special connection that would one day serve him well.

As he grew to manhood, his life revolved around his young wife, Charris. He was an apprentice blacksmith with the Elder Tabor. Their life had not yet begun to go ahead when he saw her in the arms of another man. He knew that shawl anywhere. The pain and the shock roiled through his veins and there was little to do, but send her away. He would later claim to the Elder that she was visiting family, but he knew better. Earlier he had been accosted by a crazy old woman who pressured him saying, “You must save her before the sand slips through the glass. You must loose the three keys and open the lock. You will have no peace until you do this.” He knew in his heart that something was amiss. Joran had to figure out the riddle and he had to find Charris.

Joran began his journey, a journey that would take him to the far reaches of the world in search of a woman whom he had sent away in anger. He sensed the urgency of his search as did a lone “mystery wolf” of twenty cycles named Ruyah, a wolf who stayed by his side during his quest. The Moon had trapped Charris and the only way to release her was to unravel the mysteries that would come before him. He would be given a moonshell, a sunstone, and a silver circlet, but what did they mean? The Wind spoke to him and said, “Joran, life is a treacherous journey.” He was searching for the truth, but where would he find it? The journey seemed to be endless, but how long could he continue this inane quest? Would he have to continue until his life blood left his human body?

This is a highly unusual fantasy/fairy tale that will mesmerize the reader with its dramatic originality. We’re not looking at your average fantasy, but rather an allegorical tale that incorporates many of life’s lessons that are only learned by moving past obstacles that hold us back from understanding ourselves in relation to God and other people. These lessons, many drawn from the writings of C. S. Lewis, G. K. Chesteron, Nietzche, Carl Jung, and others, range from the simple to the more erudite. For example, the South Wind claimed that “Men close their minds to the truth in their search for happiness, and because of that, happiness eludes them.”

I actually became quite excited once I realized what the author was getting at in this work and was anxious to continue on to the end. The age listing should be bumped up a notch from the young adult to the college age/adult crowd as some of the concepts in this allegory are beyond the reach of the youth audience.

Quill says: If you are looking for fantasy in the Harry Potter genre you will be sorely disappointed, but if you want to think and travel along with Joran and Ruyah in their search for life’s lessons you will be stunned at the depths this author will take you!