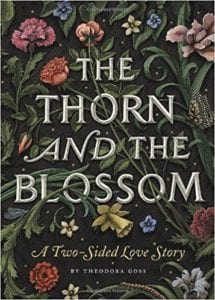 A truly original story where the plot is as unique as the book itself. Set up in an accordion-fold format, one ‘side’ of this book is told from Evelyn’s point of view. Evelyn is a girl who has had a bit of an issue all her life. When she was younger she had hallucinations, like fairies and trolls in her backyard. She’d been placed on medication by a doctor and went on to live a semi-normal life. Her parents are very wealthy and live in Boston. Her father is a lawyer and has been waiting for Evelyn to drop her ridiculous thoughts of writing poetry and studying literature, and head to law school to join him at the firm one day.

But Evelyn has been studying for a year at Oxford University, and has one week left before she has to go back home and deal with ‘real life’ once again. So she takes a short vacation to Cornwall - the small town of Clews that has one main street, a couple of historical spots, fishermen and a pub. Here is where she wants to rest, think, and get her life in order. Staying at the Giant’s Head Inn, Evelyn takes a walk one day through town and comes upon Thorne & Son, Booksellers. This is the type of place with dusty floor to ceiling shelves, filled with the real leather-bound, gilt-stamped books from long ago. A true treasure.

In the store, Evelyn comes across a young man named Brendan Thorne. He has more than a little bit of mystery but loves playing the tourist, so he escorts Evelyn up the mountain to Gawan’s Court. He tells her the story of the ancient stone circle that is located there - a story based on King Arthur, the Green Knight, and a sorceress who put a spell on a couple who loved each other with all their hearts, making sure that they would never be able to be with each other for at least a thousand years.

Soon an incident occurs that makes Evelyn practically run for home and sets up a meeting that will happen years later in a small college in Virginia, where she and Brendan Thorne will have an amazing reunion.

By flipping this book over, on the back of the accordion fold is Brendan’s story, offering information on the life he lived after Evelyn ran from his sight in Clews and took off for America. From the woman he married who was filled with energy and no fear, to the girl who he’d met and fell in love with in his bookstore long ago, readers are swept away by the life that Brendan has lived, with the tale of the Green Knight being a very large part of his journey.

Stunning, riveting, unique, compelling - all of these adjectives would suffice for this modern-day tale with a historical ‘bent,’ that offers truly evocative characters and their two-sided love story.

Quill Says: A literary work of art that will make you want to hop a plane to Cornwall in search of that amazing bookstore.