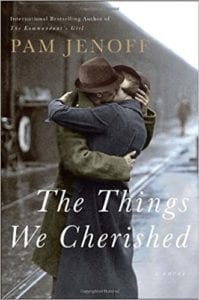 A book titled, The Kommandant’s Girl crossed my path back in 2007, and unveiled one of the most incredible writers that this world had seen in a very long time. We’re not only speaking about a ‘great’ plot or a fascinating story; we are speaking about the ebb and flow of a novel that is so scintillating and beautiful that a reader can not, will not, and does not have the power to put the book down until the very last word has been read.

Pam Jenoff, now an internationally bestselling author, is a writer who has yet to be given the tremendous accolades she so richly deserves. And with this new title she has proven, once again, that her world of romance, history, and in-depth storytelling is still a rare, matchless, and unheard of gift that other authors simply do not have.

In 2009, Charlotte Gold is a public defender who stands beneath the slightly-pompous eyes of William Penn in Philadelphia, where she works day in and day out helping the children of the streets who deserve a fair trial and a better break. Now Charlotte wasn’t on the road to this career at the beginning of her legal life. In fact, this brilliant woman was headed to the other side of the lawyerly ‘fence’ spending her time investigating war crimes, and was offered a place at The Hague to continue her efforts. But, fate intervened, and Charlotte fell in love with Brian Warrington along the way. Let‘s just say that morals and truth-telling were not exactly Brian’s forte (not a big shock, considering he was a lawyer).

One morning, after Charlotte has been killing herself to help one of her young clients who has gotten himself into another mess, Charlotte goes back to her small office, opens the door, and sitting there, after ten years, is the ex-fiancé who broke her heart. Brian has gotten a little pudgy around the middle, and the bags under his eyes, as well as the wrinkles on his brow spell desperation, not the ‘enjoyment of life.’ He married the woman he dumped Charlotte for and is looking a bit terrified at the next chapter about to unfold; but, what he still wants is that partnership, and the only way he can achieve it is by defending a man by the name of Roger Dykmans. This is a client who is going to pay for back-stabbing his brother and causing Hans Dykmans, who was a man like Schindler that helped many Jewish people during WWII to escape, to be hung. Brian needs Charlotte’s help because of her background and knowledge of the Holocaust, as well as her gift of getting clients to trust her. Although Charlotte doesn’t quite know why she doesn’t slam the door in his face, she ends up going to Munich for one week to, perhaps, revisit her past and see what she can do.

Brian stands her up once again, and Charlotte finds herself working with Brian’s brother, Jack Warrington. Jack is a bit leaner and prettier than his estranged sibling, but seems to have a certain odd chip on his shoulder where Charlotte is concerned; he can go from sweet to snooty in about ten seconds. Jack is not happy about this present case. After all, he has spent most of his life prosecuting the WWII persecutors, not trying to save them from the death they so richly deserve. But there is a way to find some answers where the quiet, Roger Dykmans is concerned, and it is an incredible journey through the memorable time of WWII.

There, the reader clings to every word as they keep their eyes on a very special clock that was built by a young man in Bavaria in 1903, to sell and get his wife (with child) out of the country and to America‘s shores, because of the frightening upheaval in his own country that seems to be getting worse every day.

The journey of this particular clock is unbelievably stunning. From Bavaria to Berlin in 1922, to Breslau in the 1940’s - this clock holds special meaning and unknown secrets as it passes through the hands of many who have their own unique story to tell. As Pam Jenoff does consistently well, the past and the present weave together to offer a look at everything from bigotry, denial, forgiveness, love, pain, war, and…sacrifice. The romance is stunning. The characters are perfectly drawn, as if the reader is sitting in these locations listening to the sound of the sirens, and watching people give everything up in order to save the ones they love.

The beauty of Pam Jenoff’s pages is indescribable on this one. This is an immaculately told passage through time, where a relic teaches us all that nothing should ever be left unsaid, and that everyone needs to find the courage to stand up for what they believe in and declare what they feel before it’s too late.

Quill Says: Breathtaking! There should never be a time when Jenoff’s name is not in the #1 spot on the New York Times Bestseller list…unless, of course, she takes a month or two off.