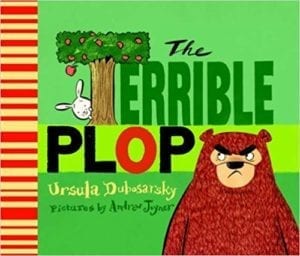 There were six rabbits sitting by a lakeside apple tree. A couple of them were crunching and munching on apples, but most of them were happily nibbling on some chocolate cake. YUM! Way up in the apple tree a nice round apple was starting to swing and sway preparing to make its way down to the ground. All of a sudden it landed in the lake with a "Terrible PLOP!" The frightened rabbits began to quickly scatter trying to get away from the Terrible Plop. They passed a fox who was quietly picking flowers for his basket. He had a startled look on his face when the rabbits rushed by.

"The Terrible PLOP?
Thinks the fox in fear.
Maybe I'd better
Get out of here!"

The rabbits, the fox, the monkey, the cat, the pig, the elephant, the tiger and the bat began to run away from the Terrible Plop. Their eyes were wide, their brows were furrowed and they ran even faster. More and more animals began to join them. "They do not stay. They do not stop. They run run from the Terrible PLOP." All of a sudden they chanced upon a "big brown bear" who was lounging in his folding chair sipping on a drink. He grabbed the smallest rabbit and was heading back to the lake with him to find out exactly what this Terrible PLOP was. Would the Terrible PLOP come out of the lake and get the bear too?

This is an amazing little story in rhyme that presents an opportunity for young children to learn to face their own Terrible PLOPs and realize that some things aren't as terrible as they might believe. All the animals were running from something that they thought was going to harm them, when in fact it was something quite harmless. The storyline, combined with the artwork, was very comical and will surely get a few giggles out of youngsters who know what the Terrible PLOP really is.

Quill says: Whether you decide to use this as a learning tool or just a fun, zany, madcap adventure you're going to enjoy it. PLOP! PLOP! PLOP!