The Sustainable You: Somatics and the Myth of Aging 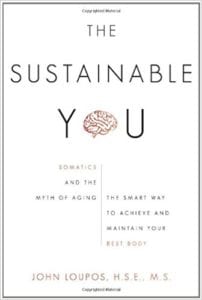 The Sustainable You: Somatics and the Myth of Aging

With aging come aches and pains, stiffness and reduced mobility, and an increase in falls and injuries, or so conventional wisdom says. In The Sustainable You, Loupos challenges this “myth of aging,” arguing that with the practice of Somatics, the decrepitude of age can be mitigated and even prevented. Loupos explains that much of the aches and stiffness that plague both old and young derive from lack of communication between the muscles and the brain, caused by the “archaeology of insults” that the body experiences over a lifetime. Muscles subjected to insults become chronically contracted, which interferes with communication between the brain and muscle. If the lack of communication persists, the brain stops attempting to control the muscle, focusing instead on muscles that are still capable of responding to its commands, making the contraction and discomfort permanent. This “sensorimotor amnesia” can be overcome by directing the brain’s conscious attention to those forgotten muscles, which reestablishes communication with the brain, releasing muscles from their state of chronic contraction and relieving pain and stiffness.

Bringing this attention to the muscles is the basis for Somatic Education, developed by Thomas Hanna, Ph.D, and originally described in his book Somatics: Reawakening the Mind's Control of Movement, Flexibility, and Health. In The Sustainable You, Loupos presents "an expanded perspective on his legacy" (pg. xix). He explains the various types of insults to the body, the process by which sensorimotor amnesia occurs, and how Somatics can alleviate its effects, supporting the rationale behind Somatics with current research in neuroscience. He explains what to expect in a session with a Somatic practitioner and describes the process of assisted pandiculation that practitioners use in treating clients. Many interesting case histories are presented, and while the goal is clearly to show the benefits of Somatics, cases are realistically presented and the limitations of Somatics are noted. Various applications of Somatics are also discussed, such as improved performance in sports, Somatics’ benefits for children, and a discussion of the many conditions for which Somatics can be helpful, some of which – headaches, insomnia, impotence - are unexpected.

While the theories and applications of Somatics that Loupos presents are quite interesting, the best part of the book is the section of Somatic exercises which can be practiced at home. They are presented in an easy-to-follow format, with “reflections” in between the exercises that include specific ideas to muse on while performing them. The exercises are not strenuous or difficult, but feel really good in the muscles that are being worked. The added level of mindfulness created by conscious attention to the muscles increases the overall feeling of well-being, making the exercises a great meditative experience as well as a physically beneficial practice. Besides being enjoyable in and of themselves, the exercises produce drastic results for relieving both chronic and acute pain. After doing only one set of exercises for freeing the sacrum, my lower back felt better than it had in years, and I was amazed at the change in my posture. A session of “swimming in all directions” exercises immediately relieved the severe pain and stiffness I had in my shoulders and arms from pushing my car when its battery died.

With the current state of crisis of our heath care system today, this re-introduction of the ideas and benefits of Somatics could not have come at a better time. Somatics can allow people to take greater control of their own health, and by fixing the underlying causes of many problems rather than merely treating or masking the symptoms, could significantly relieve a large part of the burden on the health care system. The extra dimension of mindfulness brings great benefits for mental and physical health, and the active participation of the patient promotes a mindset of self-reliance and responsibility rather than a victim mentality. Loupos points out that Somatics is not just for older people already in pain, but can be used at any age to prevent many problems before they start. Despite some vague passages where more detail would have been helpful, and some that were overly technical and somewhat difficult to understand, The Sustainable You is a great introduction to a field with tremendous potential to improve quality of life for many people.

Quill says: A must-read for anyone interested in taking charge of their own well-being, The Sustainable You offers freedom from chronic pain and empowerment over one’s health and life.