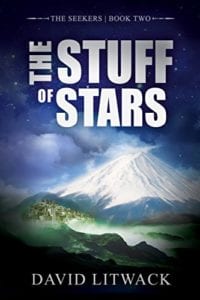 A young woman of the “Darkness” had washed up on the shore, a shore that came after a long journey across an unknown sea. It was a silent boy who broke Orah from her brief dream-like existence on the sand, but someone was missing. It was Nathaniel. Orah and her husband, Nathaniel, had spent “months confined to a cell in Temple City,” but had journeyed together in search of a knowledge that eluded their people for so long. Nate had been a hero of the revolution, but the time had come for them to leave, possibly to recover the secrets of the past and build yet another world. Indeed, Orah’s chronometer and sextant had guided them into a world filled with greenies and technos. Kara, a teen techno, just might be the one to take them to the mystical dreamers they’d heard about in the Village of Little Pond.

It was a world overrun with orphaned techno children for their parents had entered the mountain. William, their now decrepit mentor had “forbidden the children from going into the mountain fortress until” they were grown. The greenies, who labored and communed with the land, were led by Annabel, the earth mother. Caleb was determined to destroy the dreamers, who lay in cocoons in the mountain. It was a soon-to-be doomed world if Orah couldn’t converse with the dreamers, who held the secrets of the universe. The dreamers’ minds were united as one, but their bodies were little more than decaying shells.

“We call them greenies,” the mentor explained to Orah and Nathaniel, “because they believe in the land. They call us technos because we believe in machines and in our ability to someday relearn the science behind them.” Dead machines and people who couldn’t weave a decent basket, let alone weave cloth from the wild flax in their fields. The pathos of the world that lay before them could destroy the very knowledge they needed to save them. The only way to discover the secrets was to go to the mountain and enter the dream world of those dreamers. Paranoia began to erupt from both sides... Were Orah and Nathaniel taking the side of the greenies? Were the technos twisting their minds? Would they die trying to find out the secrets of a world gone awry?

The Stuff of Stars is dystopian literature at its best. It’s the sequel to The Children of Darkness, a book I wasn’t privileged to read, yet I thoroughly enjoyed Orah and Nathaniel’s journey into the unknown. It could easily have been a stand-alone novel, yet is the centerpiece of a trilogy. I didn’t feel lost, but rather was instantly swept up into the excitement of these young seekers. This novel is a tug of war between two post-apocalyptic-like societies, each one firmly believing that their way is the right way for their people, for all people. I could easily imagine our world living in this dystopian society. I cast aside all doubt that this unreal world wasn’t real as soon as I began walking with Orah and Nathaniel. This book could have been the beginning in a series, but certainly not the last. It is simply one of those novels that make me want to travel along with it discovering the dreams that miracles are made of.

Quill says: If you are a dream seeker, Orah and Nathaniel will take you into a world quite unlike any other, but which world will you find yourself in?

For more information on The Stuff of Stars, please visit the author's website at: davidlitwack.com/