The Stone of Integrity: Book 3 of the Centaur Chronicles 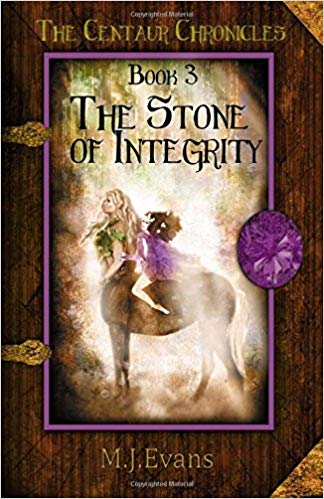 The Stone of Integrity: Book 3 of the Centaur Chronicles

For those who are unaware, a mighty realm exists called Crystonia, with a throne that has been vacant for some time. A young Duende (a descendant of the fairies), by the name of Carling, was first told by the mighty Wizard of Crystonia, Vidente, that she was the one…the future ruler of it all. At their first meeting Vidente brought forward the royal Silver Breastplate—an artifact that the chosen one would wear once they proved themselves by finding gemstones across the kingdom that set into the Breastplate. Once all the gems were found, Carling would be hailed as Queen.

However, there is pure evil waiting to stop her. Zarius is the Commander of a rebel faction of Centaurs whose only mission is to capture the throne. Carling has met Zarius before. This ego-driven Centaur has actually been bested in battle by the young Duende, which caused a wound to both his pride and his body.

Carling has returned from finding the Stone of Courage (after also discovering the Stone of Mercy in Book 1). She is summoned to the home of the historian of the mighty Centaurs, so that he may give her an old map of Crystonia which he tells her to keep safe. Teaming up with her best friends, another Duende named Higson and their two Centaur friends, Tibbals and Tandum, Carling heads home to rest before the next step has to be taken. Quickly discovering that Zarius and his crew are on their tails, they barely make it through the gates. It is there that Vidente returns in a swirl of dust to let Carling know she must now head to an island where she will find the Stone of Integrity.

The quest commences and characters come out of the blue; from an old fisherman named Fyzzle who will help Carling and her friends find this island that many do not believe even exists; to a witch named Hilgalda; to a young, handsome character by the name of Kelfy. Readers are taken on another brilliant ride filled with dazzling locations and a plot that continues to thrill, as Carling must not only locate the stone but also figure out who, exactly, are the liars in her midst.

The Swirling Sea. The Forest of Rumors. The cool scenery abounds in this series. Author M.J. Evans continues to put together a series that entices all readers. In fact, you secretly find yourself hoping that when all the stones have been collected, there will somehow be a second side to the Breastplate with even more “holes” to fill in. That way, this incredible journey will never have to end.

Quill says: Another perfect addition to The Centaur Chronicles that entertains from beginning to end.

For more information on The Stone of Integrity, please visit the publisher's website at: www.dancinghorsepress.com.