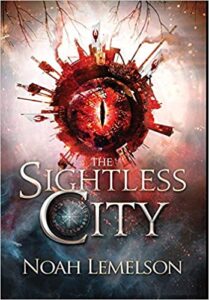 Although steampunk is a genre that’s not among the majority in 2021, when judged against, say...thrillers or police procedurals, this particular book—the first in what will be a fantasy steampunk trilogy, was not only a great read, but it was a breath of fresh air.

We begin by meeting a soldier named Marcel Talwar, and the rest of his group that’s referred to as the Huile Sewer Rats, fighting a battle that would one day become well-known in Huile history. Donning their gas masks because of the hideousness that filled the air all around them, as well as the sewer pipes they were about to head into, this gang of men, led by Captain Alba, were fighting the Pincipates in order to save their city of Huile. This particular place is seen as the “beacon” sitting at the edge of the Wastes, and Marcel is one of the many who helped liberate Huile during The Calamity, and avenge his fellow soldiers who had perished.

Fast forward and Marcel is not only a veteran of those times, who has come away from that horror with both emotional and physical scars, but he’s also now a private investigator, which turns out to be a very good job for this intelligent person. There are those in power who will do anything to protect their own particular interests in a product called æther-oil, which is actually a treasured fuel that runs Huile and one that Marcel and his gang fought to maintain.

When Marcel’s fellow soldier/brother Heitor Desct (who was also the Editor-in-Chief of The Huile Gazette) passes away, Marcel attends the funeral which is quite literally a hero’s event. Not because Heitor had money, but because a major business tycoon has decided to “sponsor” the funeral and produce a gallant sendoff for the man. Now, Marcel is working regular P.I. jobs at this time, and soon begins to help this tycoon, an acquaintance he also made during the war, by the name of Lazarus Roache. Roache is a high brow who runs his own major company called Lazacorp, that just happens to deal in another coveted product called sangleum.

Marcel soon finds himself entrenched in a case that involves everything from kidnapping to murder. Evidence he needs to follow includes some mechanical drawings that appear at his office; no one can seem to decipher these diagrams that are simply marked with the words “show to an engineer.” This leads Marcel to a massive conspiracy that may involve Roache and Lazacorp coming to the top of the other muck-ridden slime out there among the Wastes. While revealing a new revolution that might be the next step in the future of this already war-torn area – a movement that may even put the last one to shame – Marcel must deal with power-hungry individuals who seem to be even more whacked out than our own masters of evil from WWII, Hitler and his pals. In fact, the people in this world may just want to use genocide themselves in order to get control over what they truly desire.

In addition to Marcel’s efforts, his life may just cross paths with an engineer who is incredibly intelligent. As an animalian engineer, Sylvaine Pelletier is on her own journey to bring back the glory that these lands and this city boasted before the apocalyptic time period fell over them like a veil of darkness, ugliness, and sludge. Will the good guys win again? Or, perhaps worse, can you even spot who the good guys are this time around? Answer: You HAVE to read it!

The author has produced a literal slam-dunk with this steampunk fantasy. I loved learning about the Border States and their ways and actions, as well as the Wastes and the very cool city of Huile. It was amazing to “visualize” the citizens as well. From the kortonians (who are short and have square heads), to the metallic-haired malva, to the salvi (who are massive, but actually go out of their way to stay as far from those slender malva as they can when they’re in the same room) — all the way to the other mutants with extremely odd and memorable qualities. Not to mention the humans who come from a range of lands that the writer describes so well, you actually feel like you’re walking through these streets and living your daily life among these people.

Because this is a trilogy, it makes the story even more exciting. The plot keeps you involved and intrigued the entire time. It will be difficult to wait for the next one, but after reading this, it certainly looks like number two will be worth the wait!

Quill Says: Fast-paced, fresh, new, and thrilling; this fantasy world and all who are found there are truly fun to follow. 5-Stars

For more information on The Sightless City, please visit the author's blog at: www.noahlemelson.com/blog