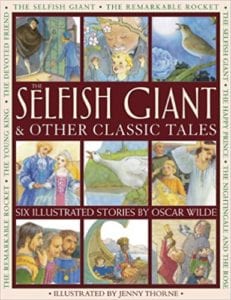 The Giant’s garden was a magical place where the children could romp, play, hold hands and twirl around in the circular maze of its setting in front of the castle. The garden was a beautiful sight to behold and there were even things like “twelve peach-trees that in the spring-time broke out into delicate blossoms of pink and pearl, and in the autumn bore fruit.” It was a wonderfully happy place for children to be, that is until the Giant decided to return home. His step was long, his jaw was set, and as soon as he saw the intruders in his garden he shouted, “What are you doing here?” Frightened, all the children ran away and to make certain they would not return he walled it in with brick and mortar and posted a sign: “TRESPASSERS WILL BE PROSECUTED.”

The children were sad and only could remember their happy times in the Giant’s magnificent garden. But alas, the garden itself began to change because the joyousness it once felt was gone and in its place was a very selfish Giant. The birds no longer sang in the branches of the trees and flowers refused to blossom. Snow and Frost were happy and set up home where there was once vibrant life. “Spring has forgotten this garden,” they cried, “so we live here all the year round.” The winds whipped around the castle turrets and the slate began to fall to the ground. Wintry beings came to play in the garden and the Giant wondered what could possibly be wrong.

One morning, the wondrous rays of spring peeked through the Giant's window and some music tickled his ears as he lay resting in bed. What could it be? Could spring have come back to his garden? He rose from his bed and peered through a window overlooking his garden. The Giant was pleased to see the children once again playing in his blooming garden. They were running through the soft grasses and climbing his trees. Doves flew between the blossoming peach tree branches and butterflies flitted among the flowers, but something was terribly wrong. A little boy stood beneath the branches of a lone tree still covered with snow, “wandering all round it, crying bitterly.” Why was he so sad? Would the garden once again be the joyous place it had once been? What could the Giant do to help?

This magnificent, classic tale of the selfish Giant has once again come to life in this smashing reenactment. This is undoubtedly one of the best all around remolded fairy tales I’ve read in some time. The tale is still told in Oscar Wilde’s words, but they are magnified and enhanced by not only the artwork, but also an orchestral accompaniment. When I first saw the illustrations and listened to some of the tracks on the CD it was simply awe inspiring. The narrator, Martin Jarvis, brings excitement to the tale in a Disneyish, Broadway manner only he can do. The dark, serious illustration of the Giant returning home to his castle immediately brought to mind the illustrations of N. C. Wyeth. Wilde’s original tale, which can be read on many online sources, carries with it religious overtones.

Quill says: This is a sizzling, ~hot~, fairy tale that will undoubtedly become a classic unto itself!