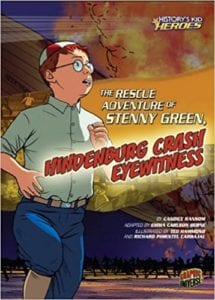 Stenny and Buzzie were playing marbles and Stenny was about to lose his blue cat’s eye, but he was thinking about the “Hindenburg” landing the next day and didn’t really care about anything else. Stenny claimed his brother, Michael, was going to get him a pass so he could go on the airship, but Buzzie figured he was full of hot air and ignored him. Michael “was an enlisted man at the Naval Air Station” and was “studying to become an airship navigator.” No one ever believed Stenny would get that pass because he’d said he’d get one before and never did. Not ever.

Stenny had even created a model of the Hindenburg from scratch and dreamed about telling his friends about the fact that it was a Zeppelin, how it had a “rigid body,” and was a dirigible. After listening to his favorite airshow, Michael showed up for dinner and startled everyone because his uniform was sooty and soiled from fires near the air station. The Hindenburg was due the next day, May 6, 1957, but because Stenny wasn’t able to get that pass from his brother he had to lie to his friends. Stenny said to them, “I’m still going. I’m just going tonight instead of this morning.” It was true that bad weather had delayed it, but that was the only truth to it.

After dinner Stenny’s father warned him to stay away from the Lakehurst Naval Air Station because he’d “only get in the way.” He was so excited about the airship’s arrival he just didn’t care and hopped on his bicycle. There was a crowd starting to gather near the chain link fence, including a reporter asking questions. It was a stroke of luck that Stenny was able to pass through the gate. Navy personnel were lining up beside the docking station and people began to run and shout, “It’s coming!” The ship was visible in the clouds and the reporter began to talk into his microphone: “Here it comes, ladies and gentlemen, and what a sight it is, a thrilling one, a marvelous sight…” Before he finished speaking … WHOOOSH! The Hindenburg burst into flames. Was Stenny going to be able to help anyone escape? Would he be able to survive the massive explosion?

This is an exciting story of a boy, Stenny Green, who witnessed the explosion of the Hindenburg. Although this story is fictionalized, it brings with it the passion Stenny had for the airships of the day. Many youngsters are passionate about planes, trains, and other vehicles, and Stenny was no different. This graphic novel introduces an important disaster in history as it “ended the age of airships with rigid bodies.” The tale flashes with excitement when the airship comes into view and the artwork bursts with color and detail when the Hindenburg explodes. The introduction and the afterword give more detail about the ship and the actual event. In the back there is a list of recommended book and website resources to explore.

Quill says: The story is very interesting and will hold the attention of even the most reluctant reader.